Knit your little one a cute (and warm!) Heart Earflap Hat with this easy knitting pattern. 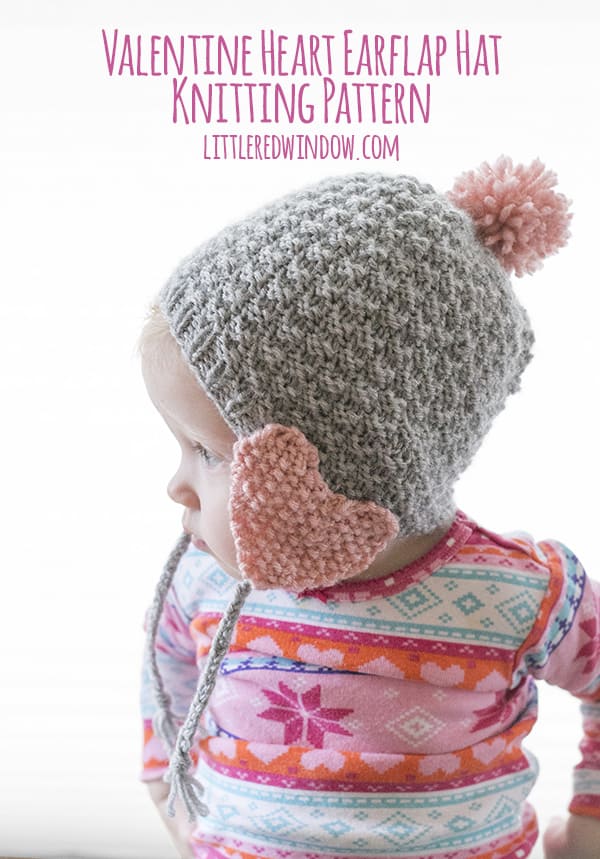 I think I have a problem. I kinda can’t stop with the Valentine’s Day hats. The nice thing about Valentine’s Day is hearts and love work all year round. So your little one can keep wearing it all winter. Of course the day I finished this hat, I checked the weather report and it’s supposed to be in the 50’s this weekend. In January. I’m not sure how I feel about that. But anyway, this heart earflap hat is cute and I always love a hat with earflaps for little ones because they stay on better. Plus it has a pom pom! Pom poms are the best. It’s a fact. Scroll on down for the pattern! 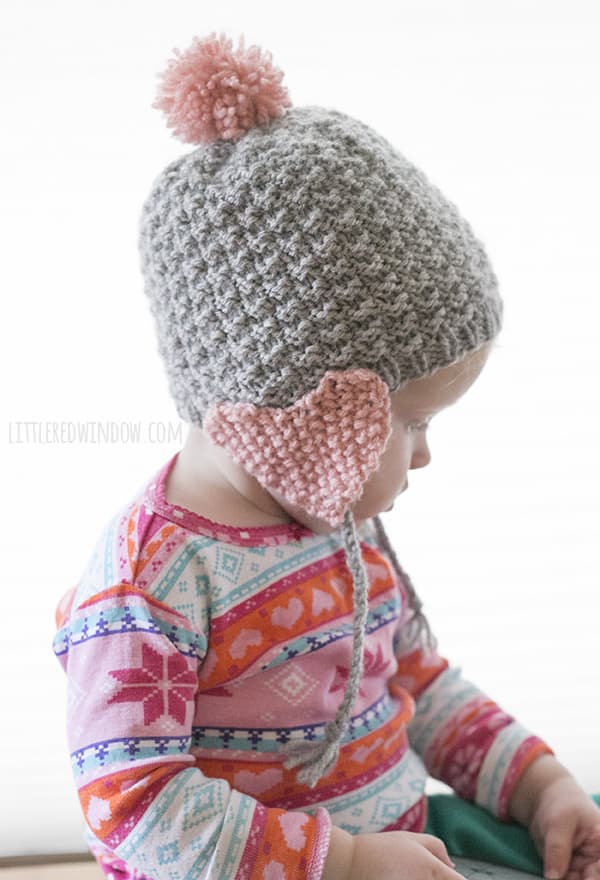 Looking for the pattern? Here's how it works:  This pattern is available for free in one size right here on my site (keep scrolling down). Or you can purchase an upgraded PDF pattern that is ad-free and easy to print in just one or two nicely formatted pages. The PDF printable also contains instructions for additional sizes including 0-3 months, 6 months, 12 months and 2T+! You can purchase the PDF patterns either via Etsy or Ravelry. There is a very small fee for the PDF version and this helps me keep Little Red Window running! Thank you so much for loving my patterns!

-The PDF is an optional upgrade, keep scrolling down for the free version-

Or download the PDF pattern from Ravelry here:
buy now
Valentine Heart Earflap Hat Knitting Pattern (6 mo. size, see PDF for other sizes) This pattern is copyright Little Red Window Design 2017 and is intended for personal use. You may not not distribute, reproduce or sell this pattern either physically or digitally.

(If you need help, my favorite knitting reference book for everyone from beginners to advanced knitters is THIS ONE!)

Using a long-tail cast on, cast on 64 stitches onto your circular needles with the gray yarn color.  Join to knit in the round and k1, p1 in a rib stitch for 5 rounds until the last 2 stitches of the 5th round, then kfb, pfb to add two stitches and make the double seed stitch pattern repeat properly.

Repeat rounds 1-4 in a double seed stitch until the hat is 4 1/2 inches long.

Start decrease after a round 4.

Decrease (distribute stitches evenly between 3 double pointed needles and knit with the 4th):

Round 11: k2tog repeat to the end of the round

Cut yarn, pull through loops and close. Weave in ends. 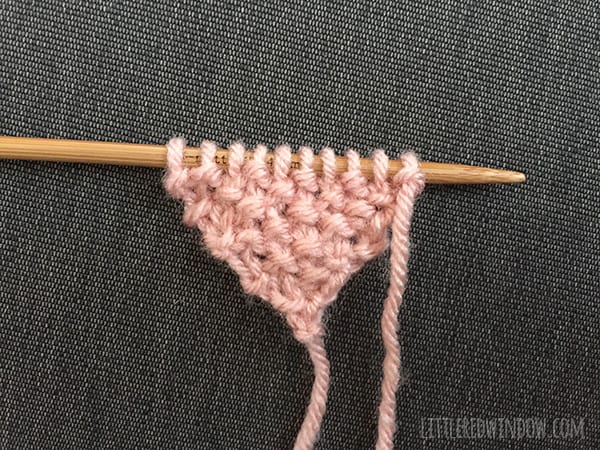 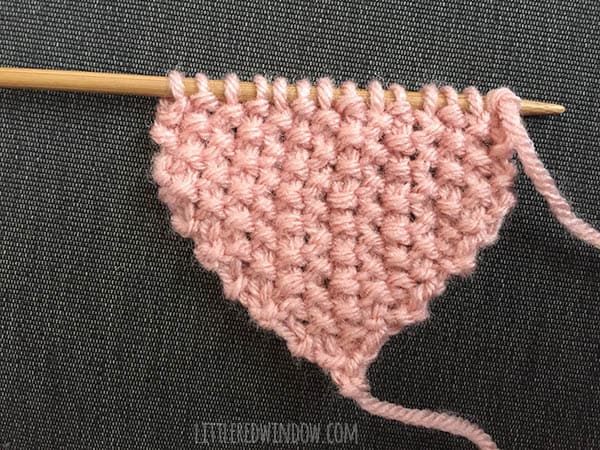 To make the tops of the heart, work rows 21A – 23A with only the first 7 stitches on the needle. Move the other 7 stitches to a stitch holder or leave them on a spare needle, you will come back and work them next. 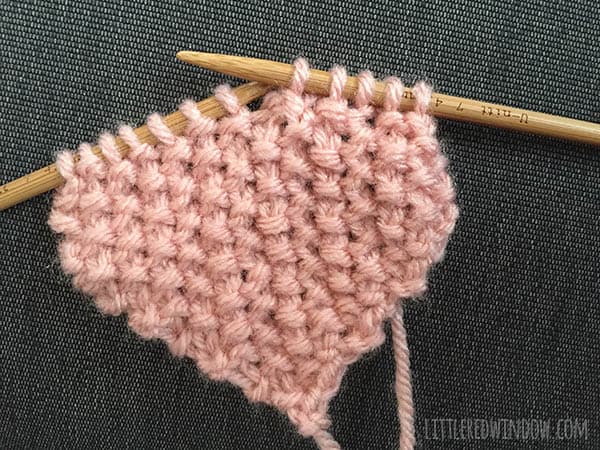 Now, working with the other 7 stitches, join in new yarn and: 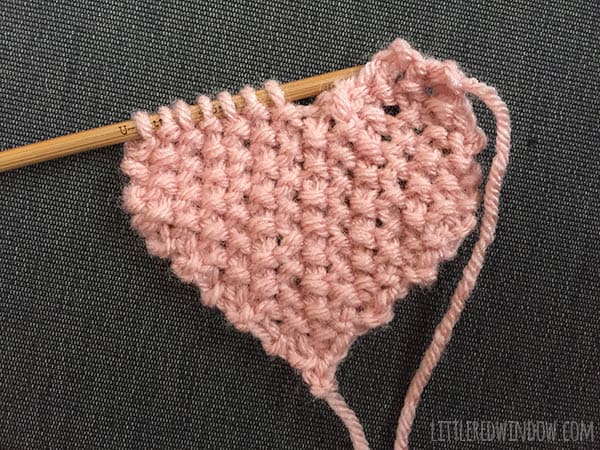 Weave in all ends on the back of the heart 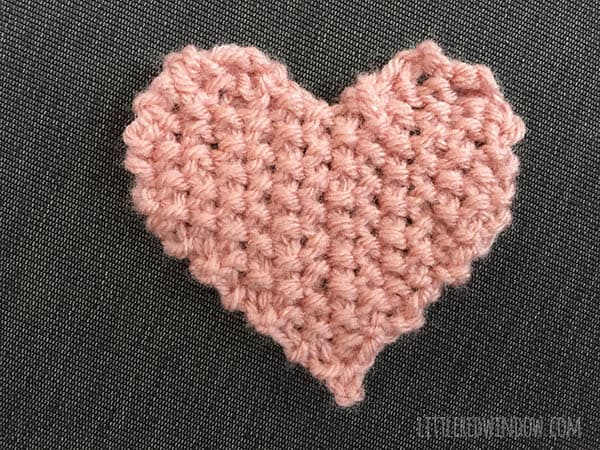 To assemble the hat:

Sew the heart earflaps to either side of the hat with a length of pink yarn. 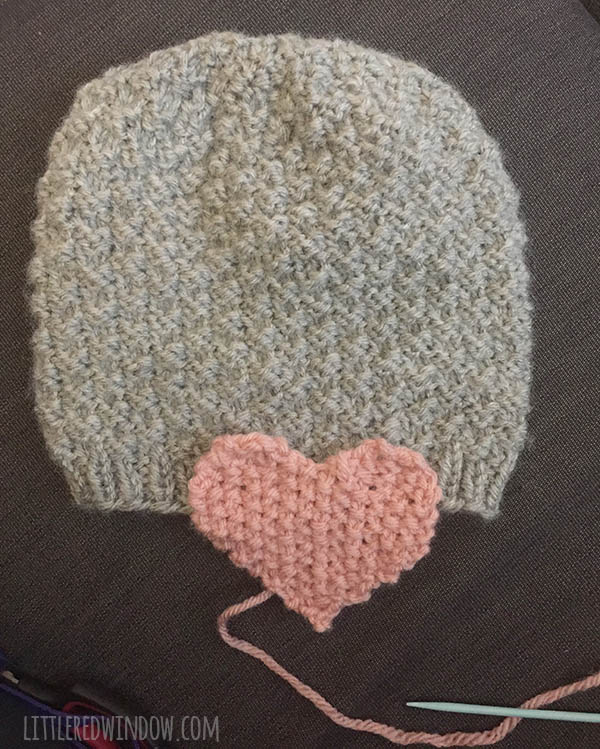 Then cut 6 pieces of yarn 18 inches long. Thread 3 of the pieces on one yarn needle together and thread them through a couple of stitches on the back of one heart earflap. 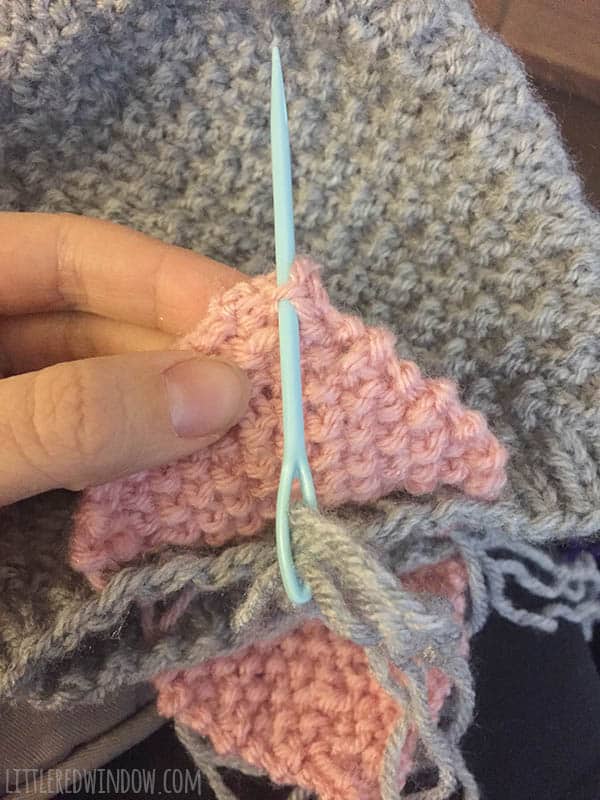 Pull them through halfway so you have 6 even strands dangling from the earflap. Then braid those six strands all together until the braid is about 6 inches long. 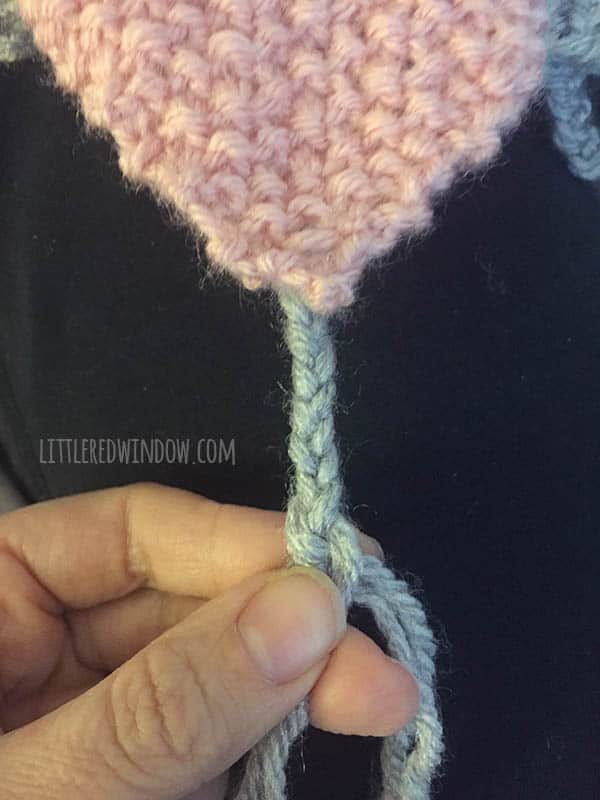 Tie the braid in a knot and cut the ends to make a little tassel. Repeat with the other 3 18-inch strands and the other earflap.

To make the Pom Pom:

Wind the pink yarn around the three fingers of one hand at least 100 times. The more times, the denser your pom pom.

Cut another piece of yarn about 18 inches long and tie one end of that very tightly around the center of the wound yarn.  Leave the other end of this center tie long to attach the pom pom to the hat.

Using sharp scissors, cut the loops on either side of that center tie to release the pom pom. Trim your pom pom as necessary to make it nicely and evenly round.

Thread the long end of the center tie on your yarn needle and use it to sew the pom pom to the top of the hat. Make sure it is attached securely as this is an item for babies. 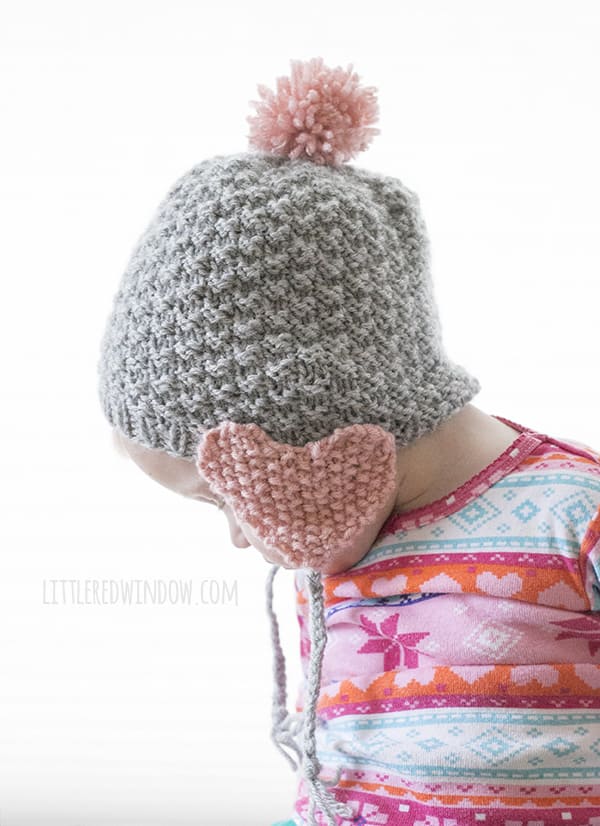