Make these adorable Keepsake Snowman Handprint Ornaments with your little ones to capture how cute and small they are! 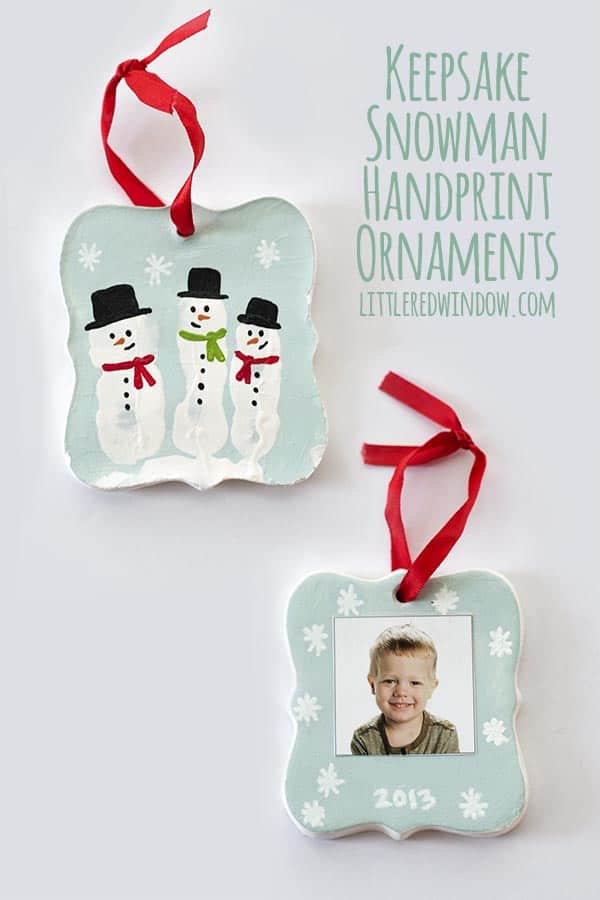 When we were growing up, every year for Christmas, one of my Aunts had her daughter (my cousin) make a very simple crafty gift for each of our other aunts and uncles every single year pretty much until she went to college. My mom has five brothers and sisters so this was not a simple undertaking.

I always admired that tradition. Especially in a large family, the cousins get a gazillion gifts and I always thought it was a nice way of having kids say thank you to the grown-ups.

So I decided I wanted to start something similar with O and I thought, what better for his Aunt and Uncle and the Grandparents than Christmas ornaments?

So that first year, when he was about four months old, I tried making baked salt dough handprint ornaments.  And it was a complete disaster. I wish I had a picture. They cracked, they bubbled, and they broke.

And also I had an infant so I was too exhausted to come up with a plan B. So I aborted that year.

But the next year I tried again and made these adorable Santa Handprint ornaments based on many versions I found on pinterest. I used regular clay from the craft store that you could bake and acrylic craft paint. They ended up kind of being a bit of pain but now in retrospect I LOVE having a record of how cute and little O’s hand was when he was 1. 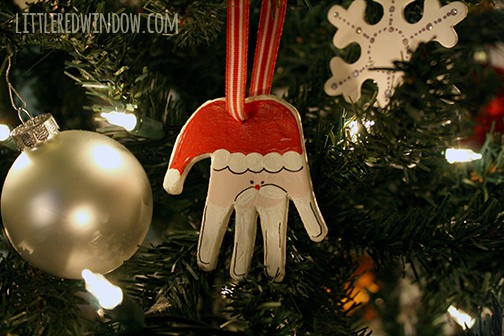 Then last year, I decided O was finally old enough to help. So I grabbed six wooden snowflake ornaments from the Dollar Spot at Target, painted them white and let O color on them with markers (markers! more exciting than anything to toddlers!)  Then I popped his picture in and added a coat of polyurethane to protect his art. 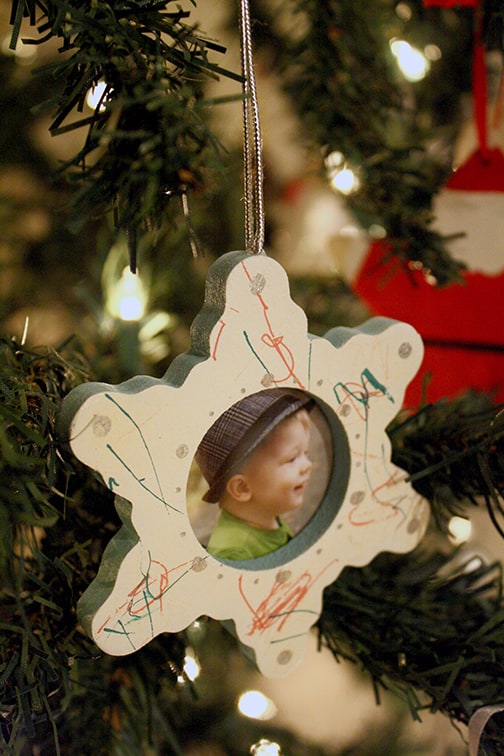 I think they key to this kind of project is always the ability to assembly line it. So this year, I saw quite a few Snowman Handprint Ornaments all over pinterest and thought I’d try to make my own version. 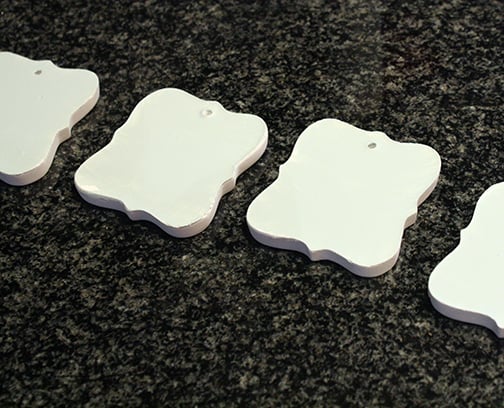 Then I bribed O with some bunny gummy snacks, put paint on his three middle fingers and had him press them down on the ornaments to make the snowmen bodies. He doesn’t really love getting dirty so the bribery was essential to the plan. If you have or know a 3 year old, you’ll understand. 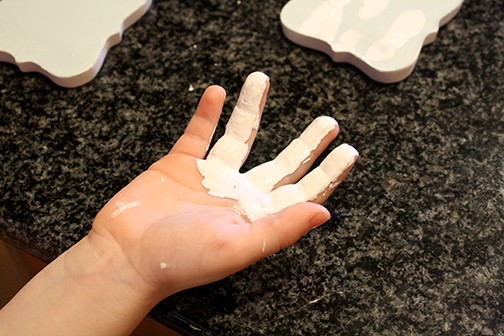 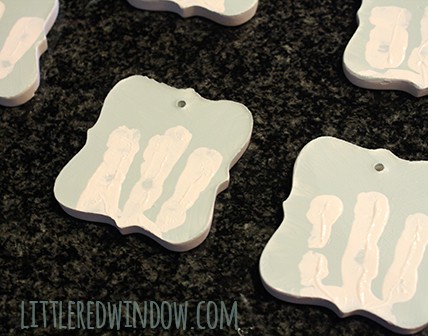 When that dried, I added a few details with a small paintbrush. First, eyes, mouth and buttons… 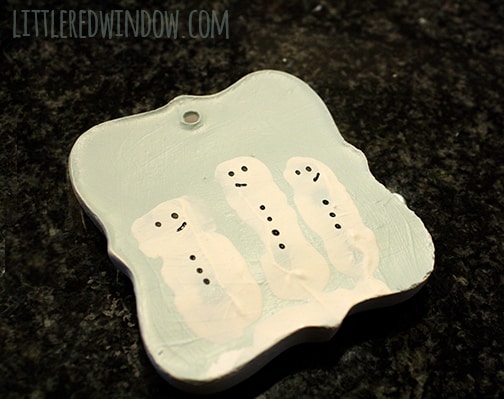 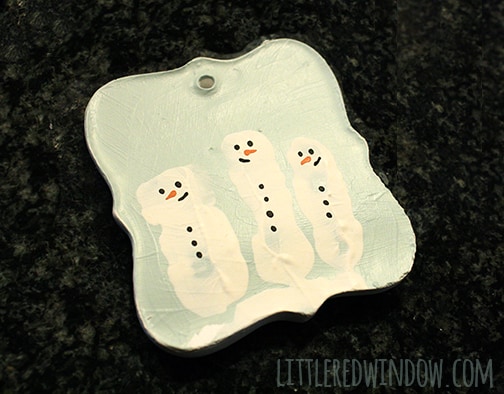 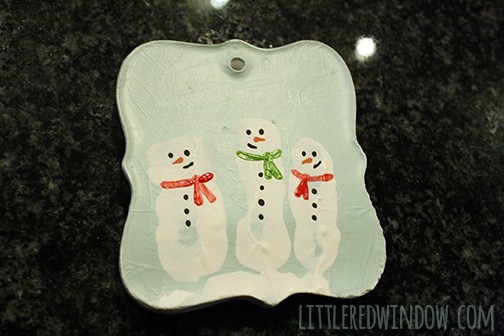 And finally hats, of course!

These ornaments were pretty nice and thick so I decided that the other side needed something too. I printed out some tiny versions of O’s school picture, used Mod Podge to glue them on and then added his name, the year and some little snowflakes with a paint pen. Then the whole thing got another coat of Mod Podge to protect it.

And that was it! Piece of cake! Here it is on the tree: 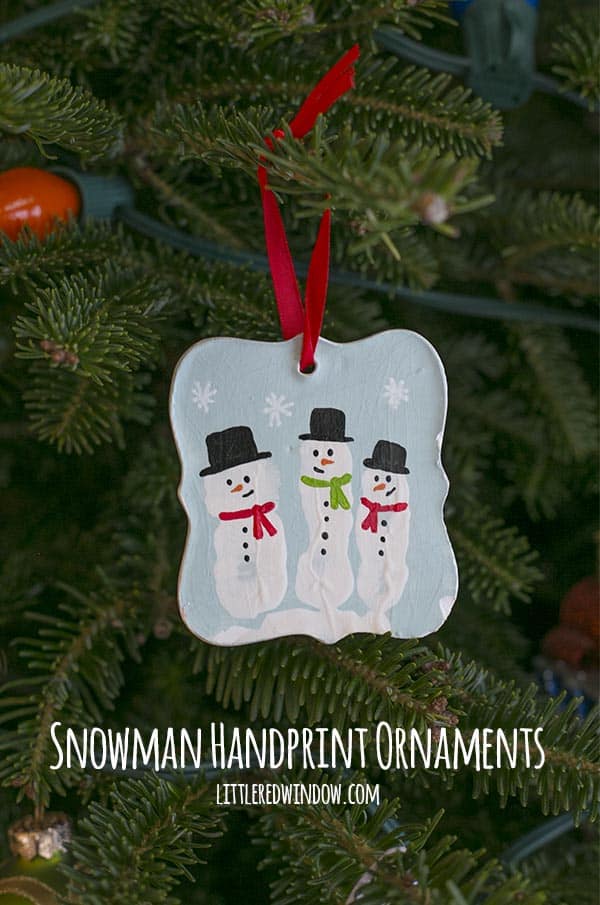 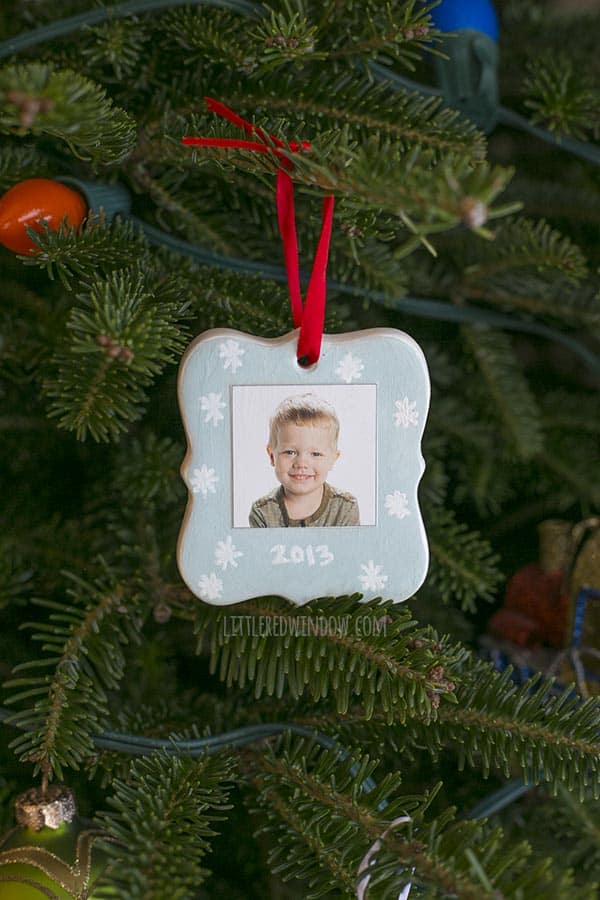 Eventually I hope that he will do more and more of the creating on his own and we’ll have a nice collection of “snapshots” of what O was like each year at that age.