A sweet garland for spring with cute little bunnies and hatching chicks! 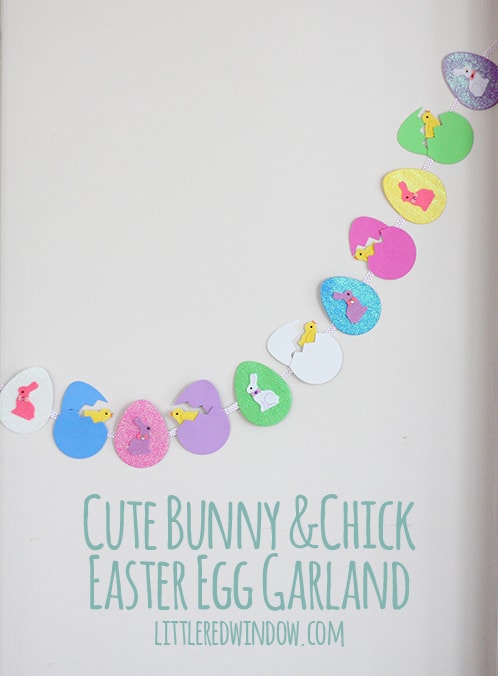 Ok, you guys, that’s it. I officially give up. I cannot take any more winter. Enough. Uncle. I’m done! I don’t know what it is about this year that has me so over it. Normally I don’t mind winter so much. But man, this year it seems especially never-ending. This has probably been compounded by the fact that Aa has had two long business trips in the last month and a half and BOTH times it snowed. The first time 20″ (I’m not kidding) and the second, at least 6″. And I have a bad back. A neighbor helped us the second time but really, asking someone to shovel 20″ of snow for you as a favor, a neighbor you have only just met, is just too much of a favor to ask. So I was on my own for the blizzard. Oh wait, that’s not true, O “helped”.  But that mainly consisted of climbing in snow drifts and knocking snow back where I had already shoveled. I had a hard time enjoying the cute-ness because I was so grumpy about it.

So anyway, I decided that maybe if I just bring spring inside, the rest of the world will take a cue. I’ve been buying flowers every time I go to Trader Joe’s and I put up my Spring and Easter decorations early because I wanted something cheerful to look at. I think it’s helping. A little. Maybe?

Anyway, the other day, at the same time as I bought the supplies for my Glittery Shamrock Wall Hanging, I grabbed some glittery egg shapes 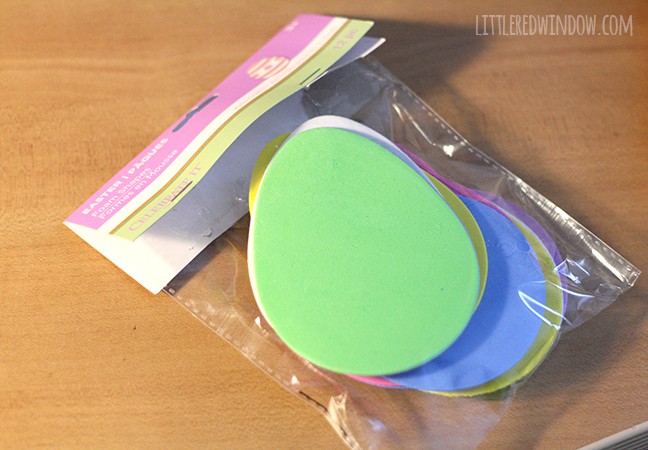 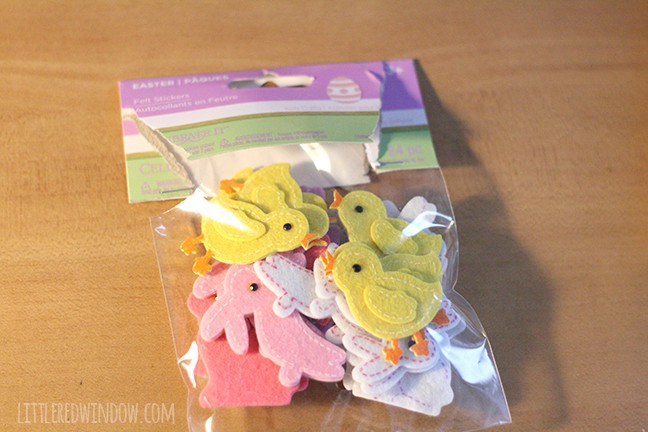 And guess what? Just like the shamrocks, the glittery eggs were only HALF glittery. The other half were just plain. So I’m still annoyed at the craft store. But I made it work and in the end I ended up with a really cute Bunny & Chick Easter Egg Garland. O came up as I was finishing it and said, “Oh Mommy! This is LOVELY!” Which made me laugh. But you know, it’s got the 4 year old stamp of approval which is all I can ask for, really.

Here’s how I did it.

1. First I grabbed a length of grosgrain ribbon and laid out my egg shapes along it so I could see how many would fit and how much space they would have between them.  I also laid out the felt stickers on top roughly where I wanted them just to see what it would look like. 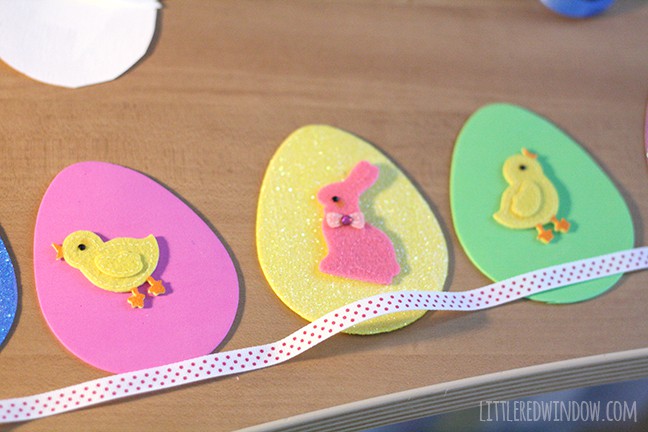 2. I decided the bunnies were going on the glittery eggs and the chicks would be hatching from the plain eggs. So since the animals were already stickers, I just had to stick the bunnies on. So easy!

3. Then for the chicks, I used scissors to cut the plain eggs in zig zag a little above halfway. 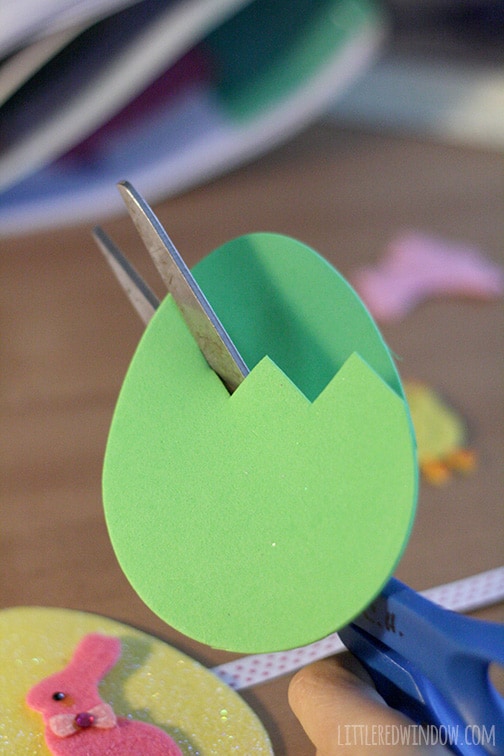 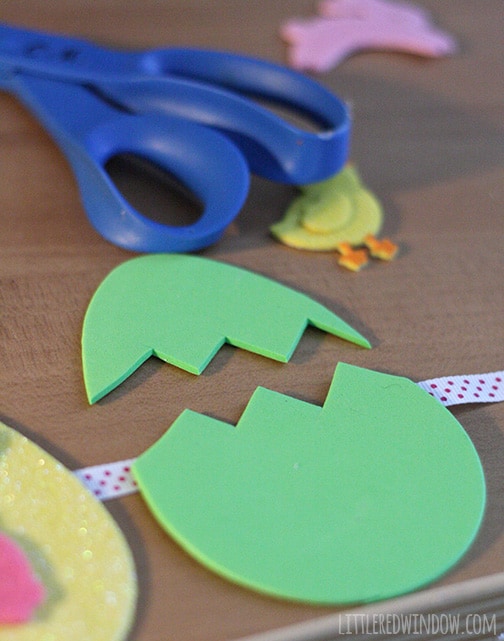 4. Then, using hot glue I re-attached the top of the egg at an angle and glued the little chick to the back so it looked like it was peeking out. The chicks are stickers too but I just left their paper backing on. 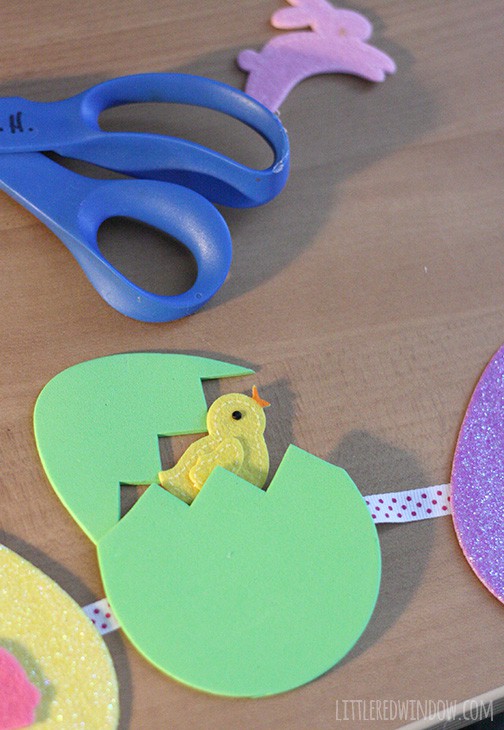 5. Finally I just hot glued the egg shapes to the grosgrain ribbon and I was done! 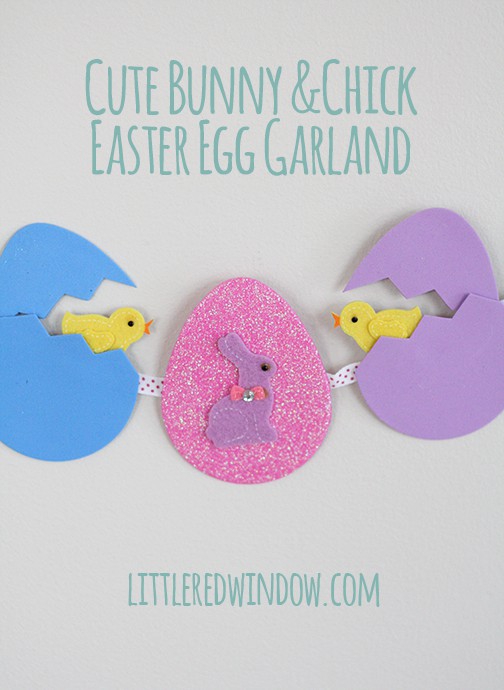 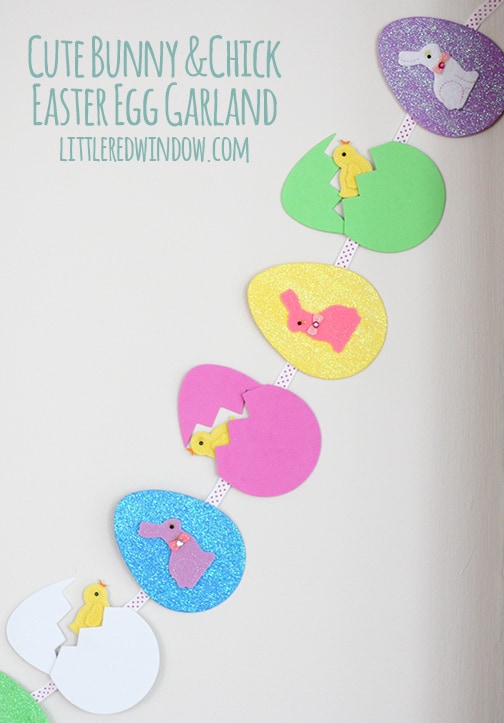 And one last one photo because when your “helper” says, “please take a picture of me with the eggs!” you just kinda have to do it… 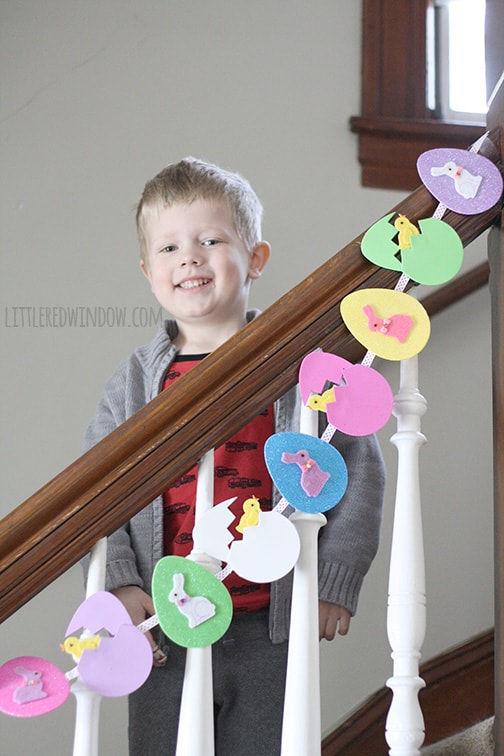 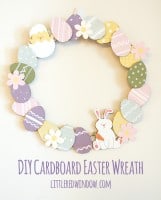 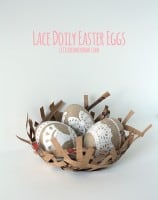