When I decided to go to grad school for architecture, somewhere in the back of my mind, even though I knew it was silly, I think that I thought I would be spending a lot of time building cute little doll house models with furnishings and wallpaper. I would sit at a clean and sunny desk, sanding tiny chairs and lovingly placing them in beautifully crafted model buildings. Then I would show them to my teachers and they would have lots of nice things to say.  (Note to those of you considering architecture school: It is NOT like that!)

In fact, there were definitely a lot of models but many were conceptual, not realistic, and they were most often built in a time frame most people would consider insane. Sometimes you didn’t get to sleep much. And then when your model (and accompanying drawings and documents and diagrams etc.) were done, you had to stand in front of a room of professors and your peers while everyone told you what was good about them (usually a few things) and what wasn’t great (usually ALOT of things) I actually don’t think I’ve been as consistently stressed out ever before or since those three years.

Of course, a lot of good things come out of an experience like that. You definitely develop a tough hide for constructive criticism which I think is great. In fact, it’s probably the best thing I learned from grad school.  And you learn to present your ideas in a clear and concise manner which is another good skill. But more than anything, I learned my way around an exacto knife and various kinds of glues and fixatives like nothing else. I often joke with Aa that we don’t have Masters of Architecture degrees, we have Masters of Cutting and Gluing!

All that to say that a few weekends ago, I had an itch to make something. Anything. Does that happen to anyone else? I couldn’t sit still, none of my current projects seemed interesting and O was napping. Which is when I saw a bunch of boxes waiting to go down to the recycling bin and I remembered I had pinned a little cardboard house on Pinterest the other day. The box I had wasn’t big enough to make a house that O would fit in, but, I thought, he does have several sets of Melissa & Doug Whittle World people and loves to play imaginary games with them, maybe they should have a toy house! 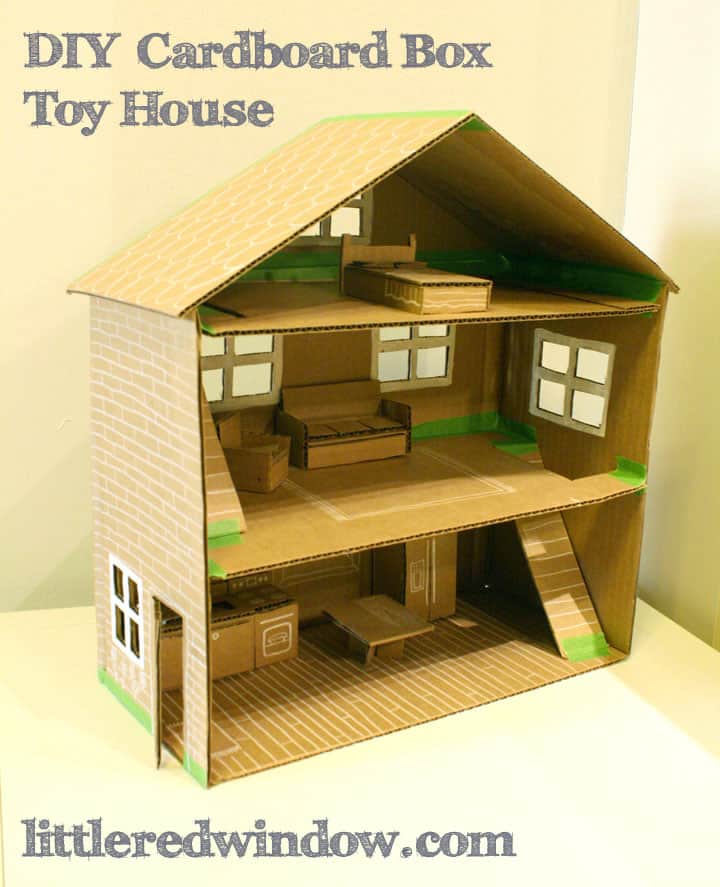 First I cut the box in half and cut off two of the top flaps: 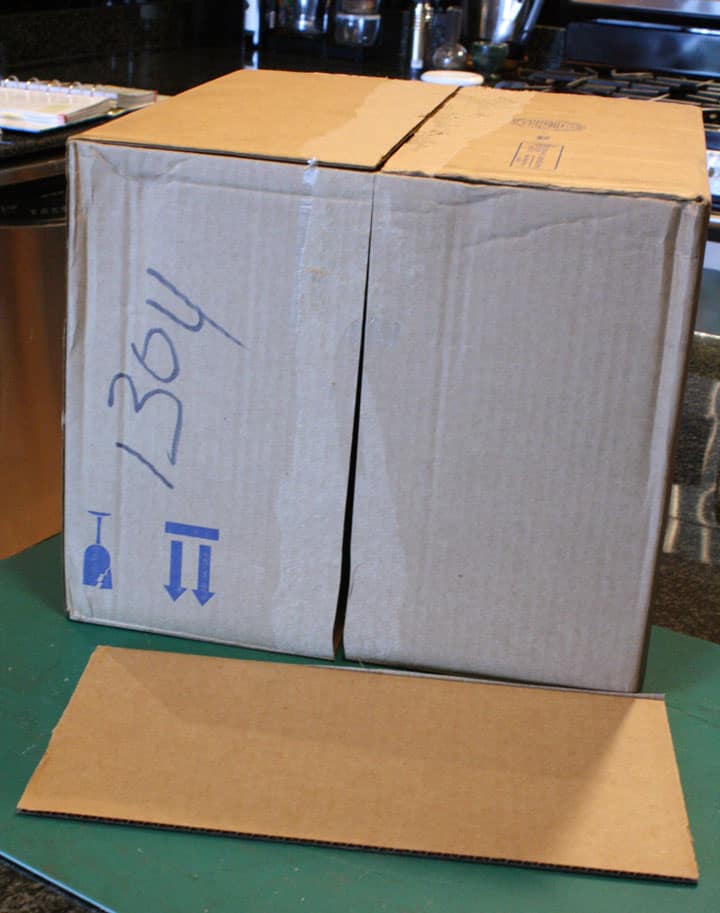 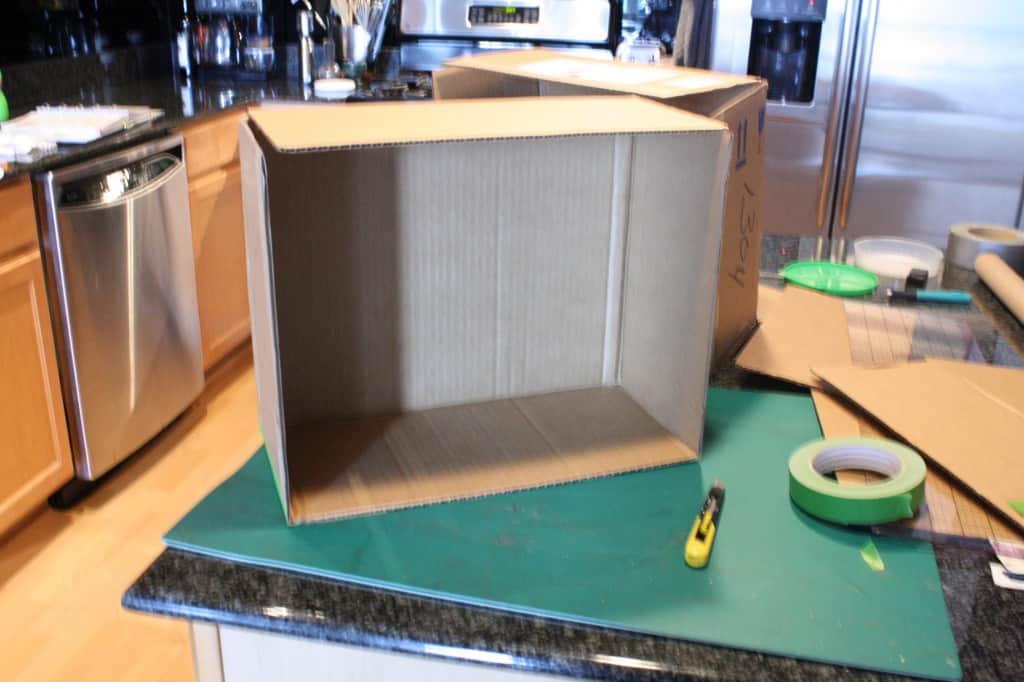 That picture is terrible, sorry!

Next I added floors and the peak for the roof. I connected the pieces with green frog tape, turns out it sticks pretty well to cardboard although next time I think I would add a little glue too. 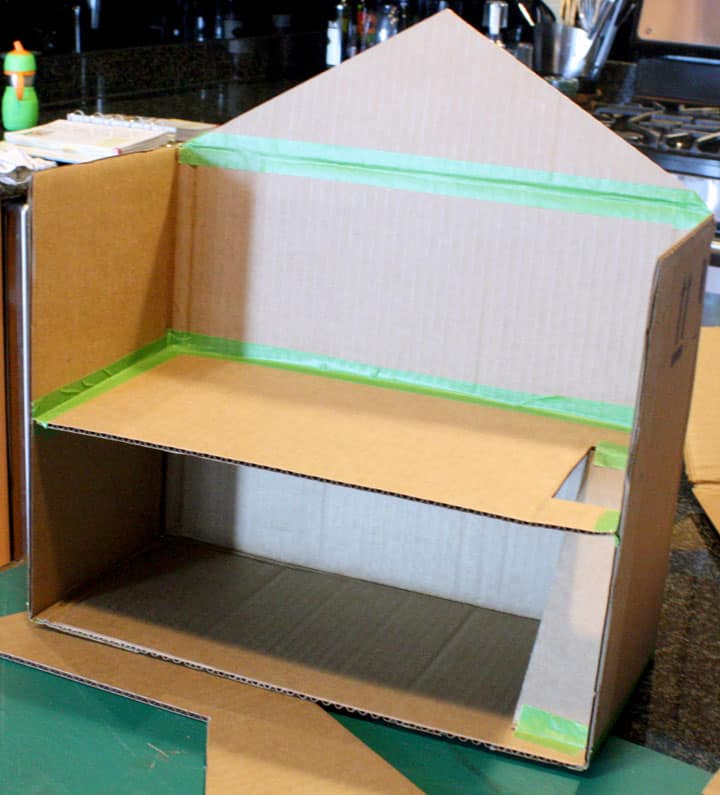 Then I added the roof and another floor for the attic. 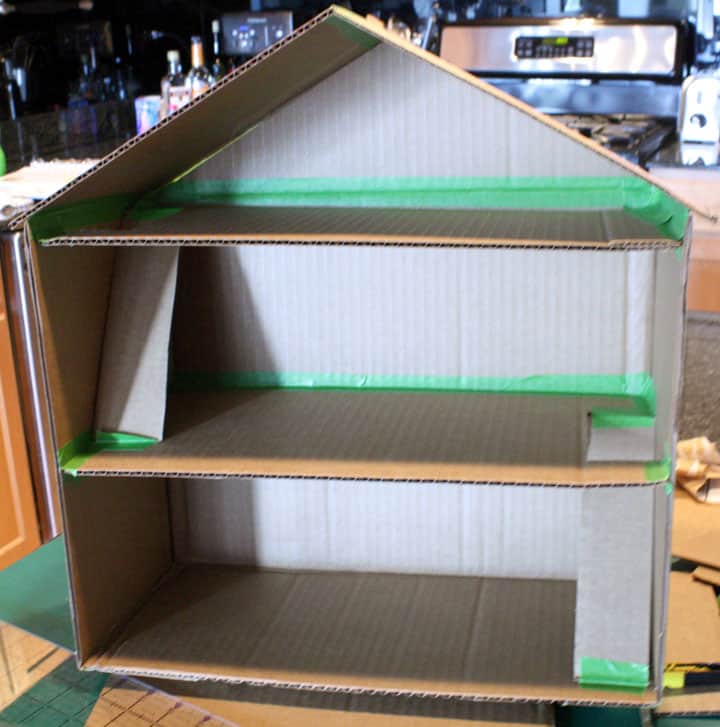 When I had the basic shape of the house I started decorating it with a white paint pen. At this point O had woken up,came into the kitchen and said, “Oh! A little house! Is that for me to play with?!” And he waited (mostly) patiently until I was done.

The finished product was a huge hit! O’s been playing with it all week! Is it perfect?  Definitely not! And that’s ok! (It is for a small child after all.  I firmly believe it’s ridiculous to have things for little kids that are too precious for them to play with and/or that can’t be cleaned or washed.) 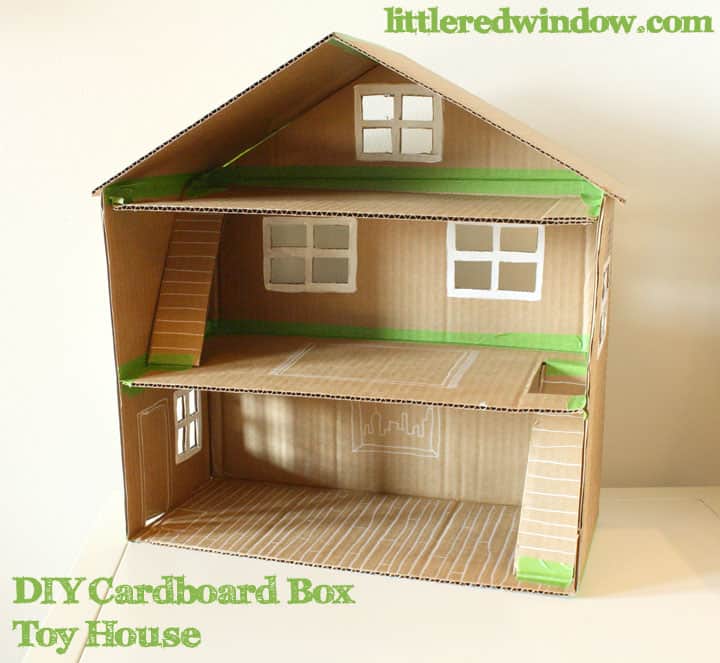 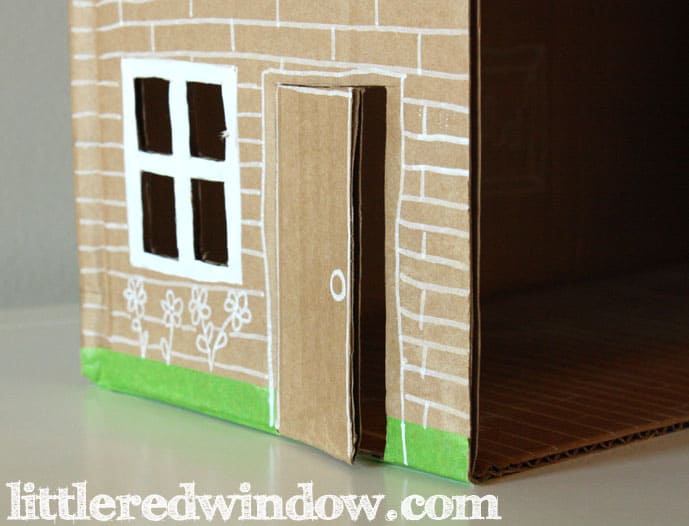 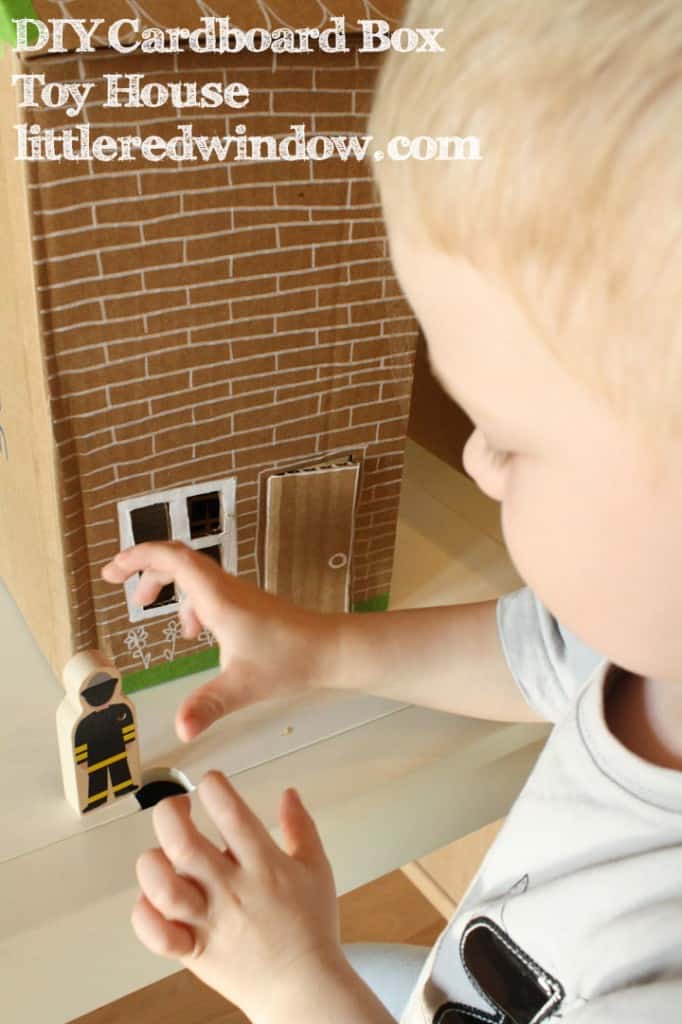 The firemen really liked their new digs but they seemed a little uncomfortable. Could I let them live in an empty house? No way! So I did a little interior decorating and made some quick essentials. 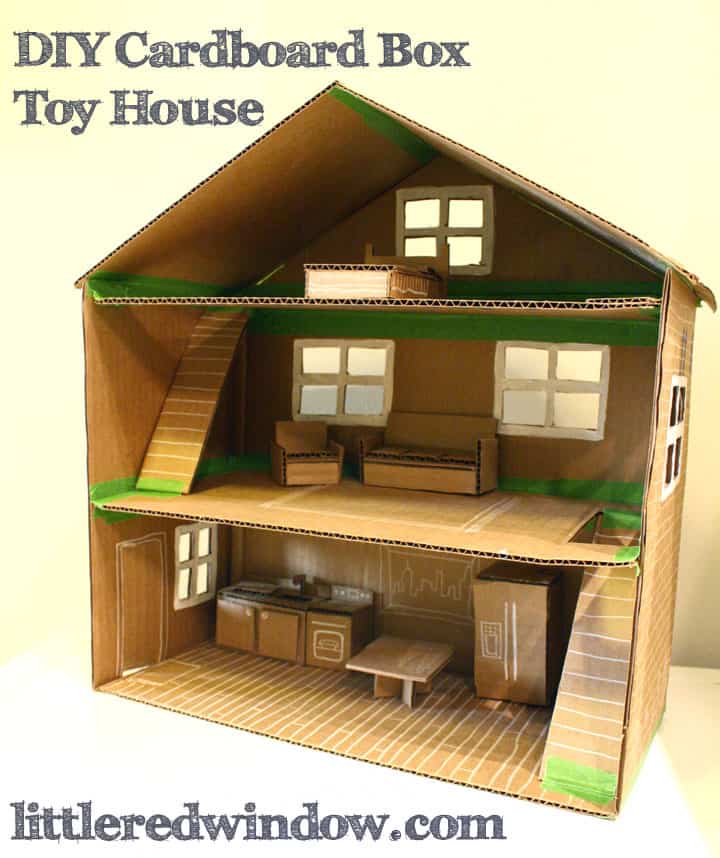 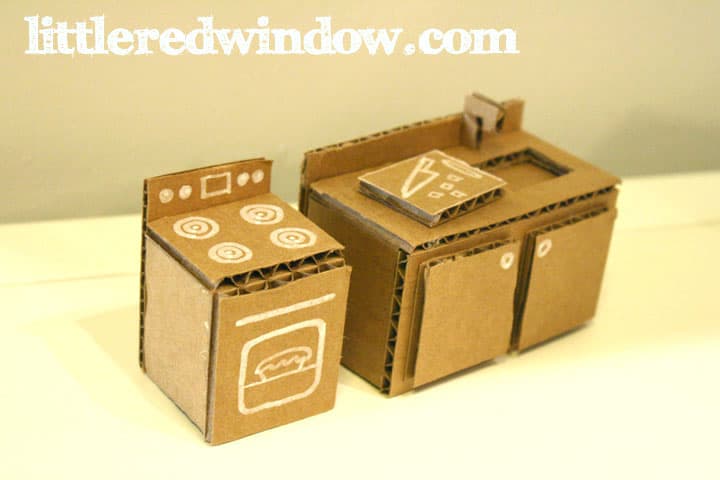 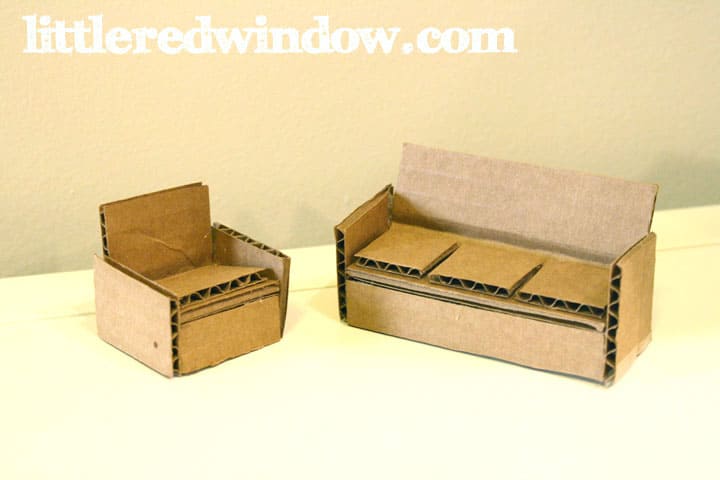 Perfect place to take a load off! 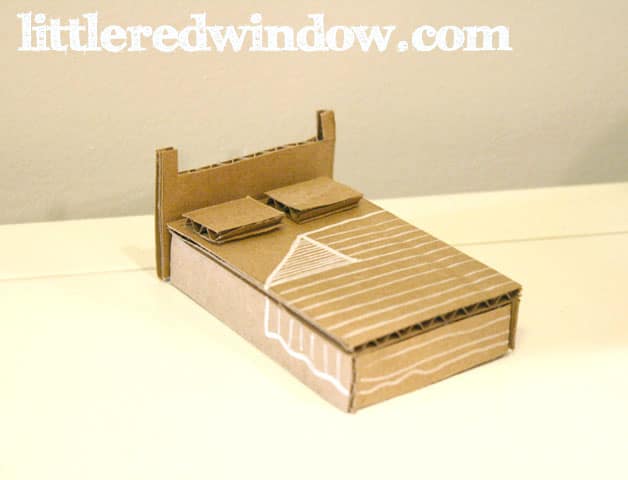 The firemen are very fond of taking naps in their new bed!