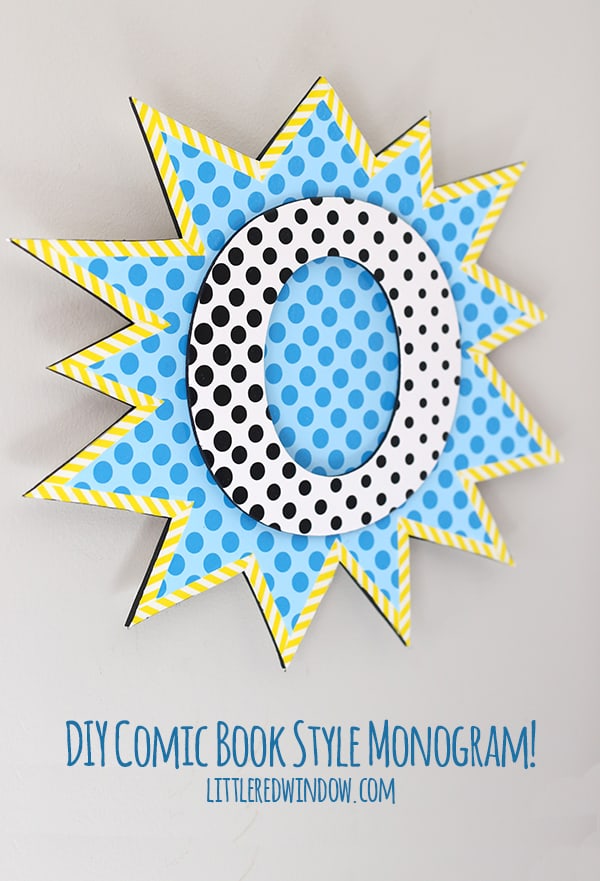 So when we moved into our new (ish) house, O’s was in the little room still in a toddler bed. And after we removed the weird closet in there, he had patched walls and it was kind of a mess. I did hang all the old art from his nursery. And he had the same rug and bedding and everything, but it still wasn’t great. And you know what? He totally didn’t care because he was 4. But then once Baby V was on the way, he moved into the bigger guest room and into a big kid bed and suddenly we needed new bedding and the art we had up in his old room looked really tiny on what was suddenly like 4 times as much wall space. It was sad. And while he still didn’t really care, I did. So, long story short, I found a bedspread I loved from target and that was the start of the new room. It’s a graphic charcoal and white geometric pattern and then I got sheets with dark gray little x’s on them.  We also kept the same green and blue rug and so now we are slowly transitioning it from baby to bigger kid while generally keeping in the same color family, green and blue plus dark gray/white geometric. I like that kind of decorating where you build on/edit existing decor to turn it into something new because while I looooove designing rooms I am also a cheapskate and can’t stomach replacing everything in a room at once.

So after we spent a weekend installing these awesome decals, I decided the new theme for his room would be something I’m going to call “understated superhero”. Which is superhero-esque without any name brand superheroes or any bright primary colors. So he gets the joy of superheroes and I get the joy of stuff that’s not covered in garish characters and retina-blinding colors. It’s a good compromise!

Anyway, the decals helped, but we still had a lot of empty wall space so I had, over time accumulated a little pile of letter O’s with the intention of doing a monogram gallery wall type of thing. This awesome comic book style monogram is the first part of that and I seriously think it turned out so cool. It’s modern and superhero-related but within my color scheme and totally unique. Plus it was cheap so extra double win! Here’s how I made it…

Adhesive vinyl in blue and black (if you don’t have vinyl you could also use pre-made dot stickers like these!

1. I started by adding the dot pattern to the chipboard letter. I wanted it to have a pop art comic book style ombre effect; kind of Lichtenstein-y (that should really be a word). So I created a dot pattern using my Silhouette Cameo software and then just scaled it down across the grid. If you’re using dot stickers then just go ahead and apply them in a grid pattern and skip ahead! 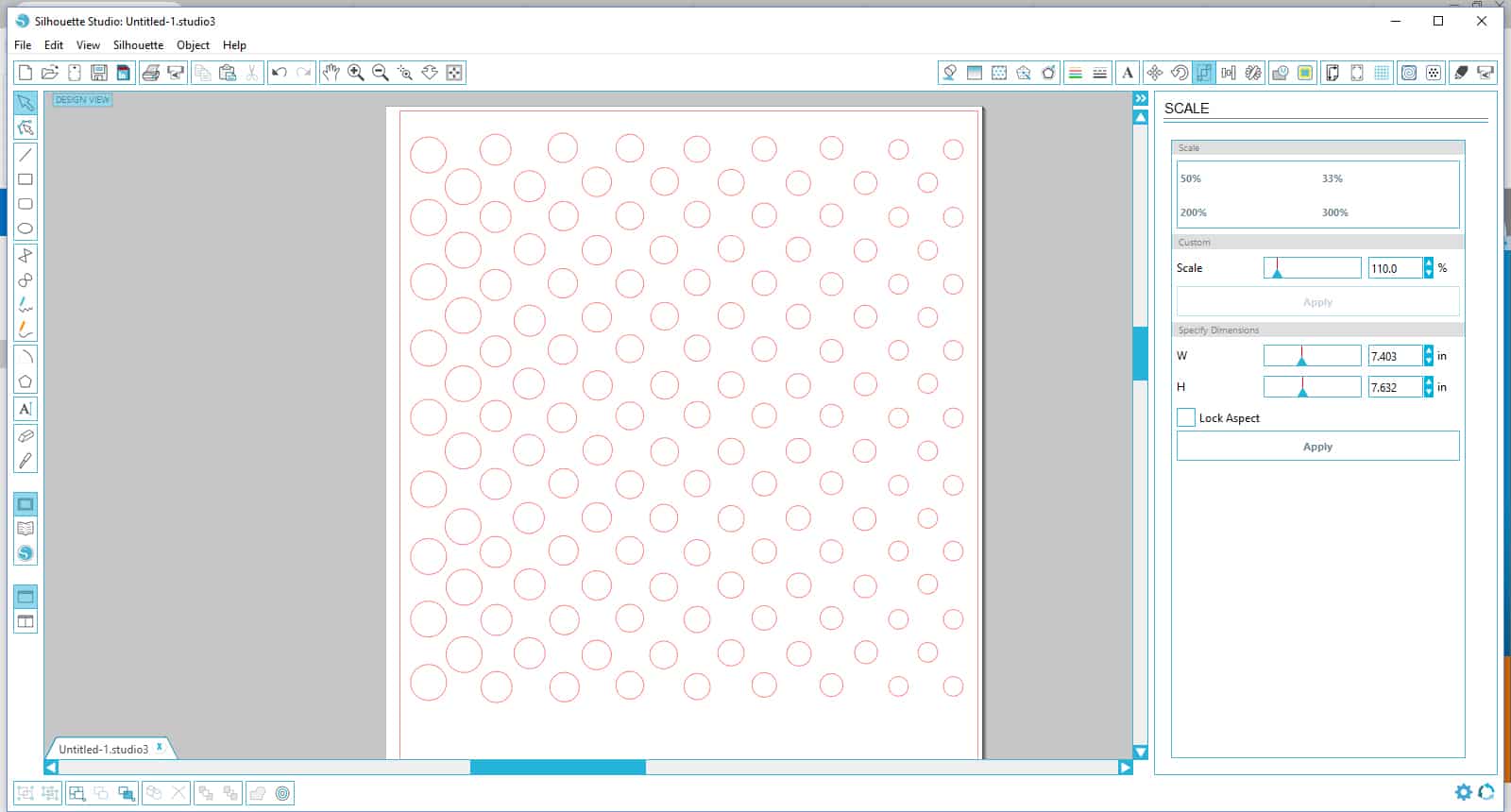 2. I cut this pattern from black vinyl using a blade setting of 1, a speed of 2 and a width of 10. Go get a snack, it takes a while! Then peel away the negative space background. (I actually saved this piece in case I want to use this pattern as a stencil on some other project later, I just stuck it back down to the vinyl backing after I picked up all the dots.) 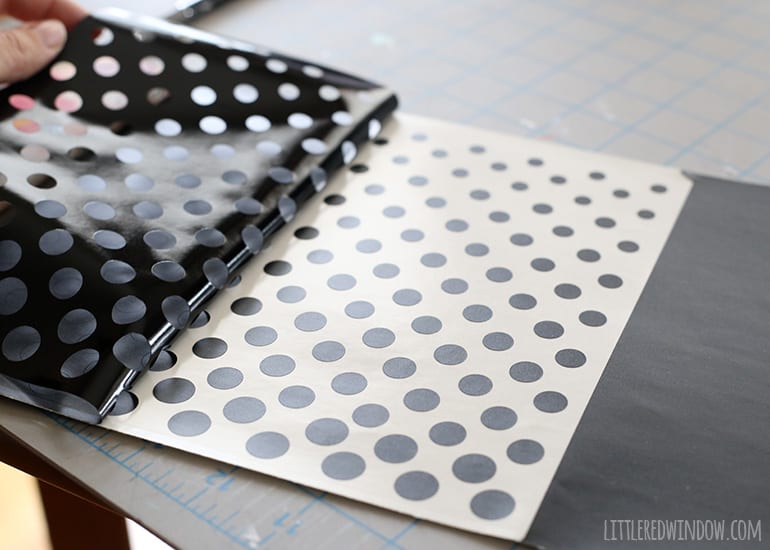 3. Then use clear contact paper or transfer tape to lift the dot pattern. Make sure to rub all over with a credit card or something similar first to make sure they all come up. 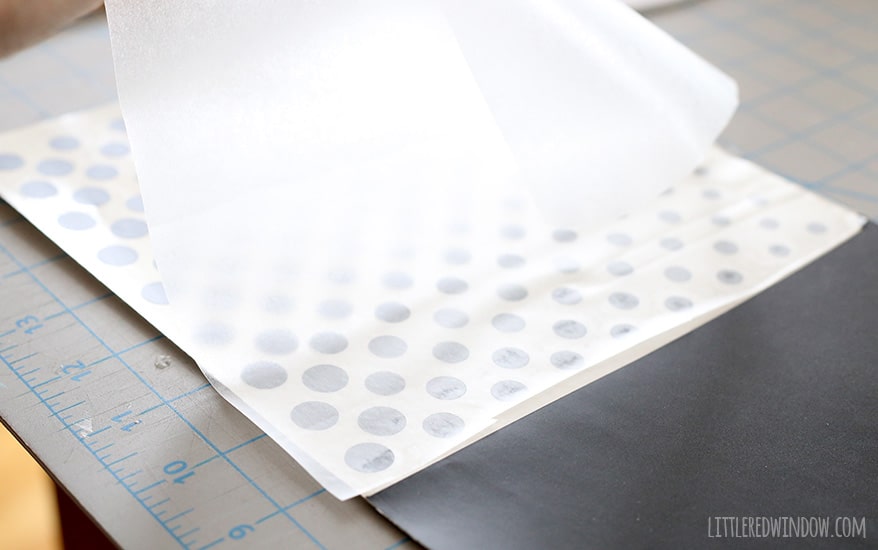 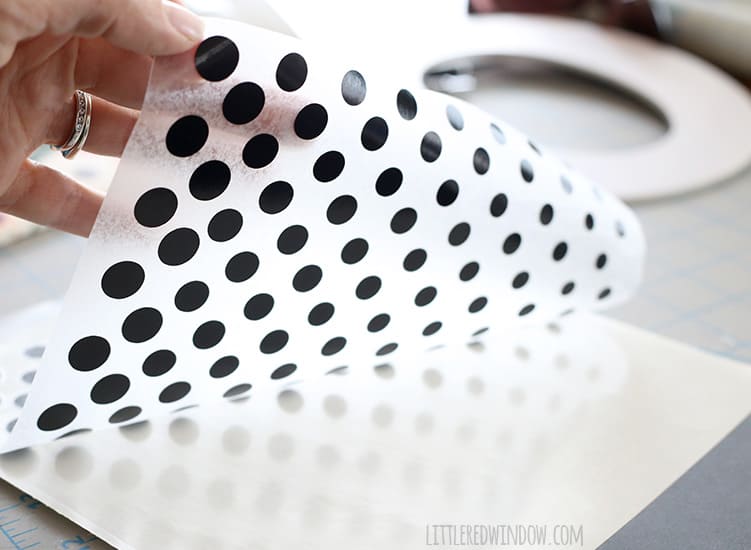 4. Caaaaarefully lower the vinyl down onto your chipboard letter.  Rub all over to adhere the vinyl and then slowly peel off the contact paper or transfer tape, leaving the vinyl dots behind. 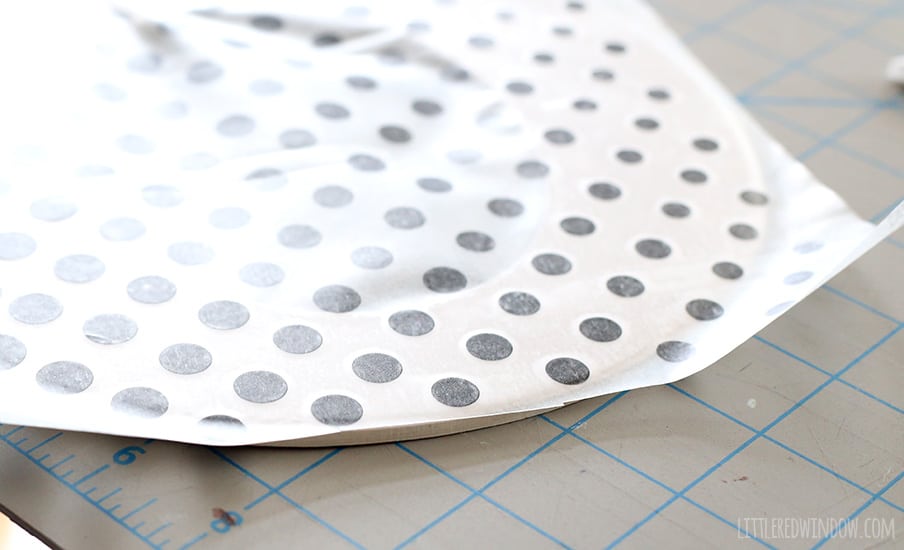 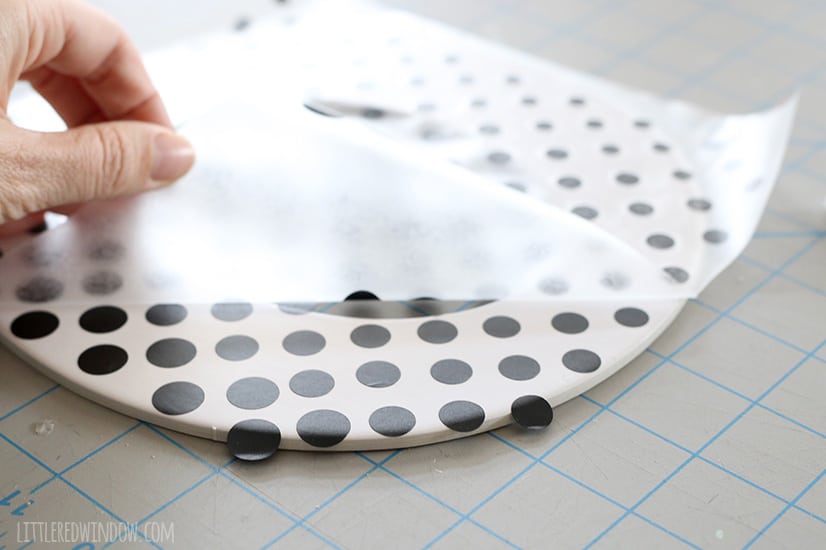 5. Flip the letter over and use a craft knife to trim any dots that overhang the edge of the letter. 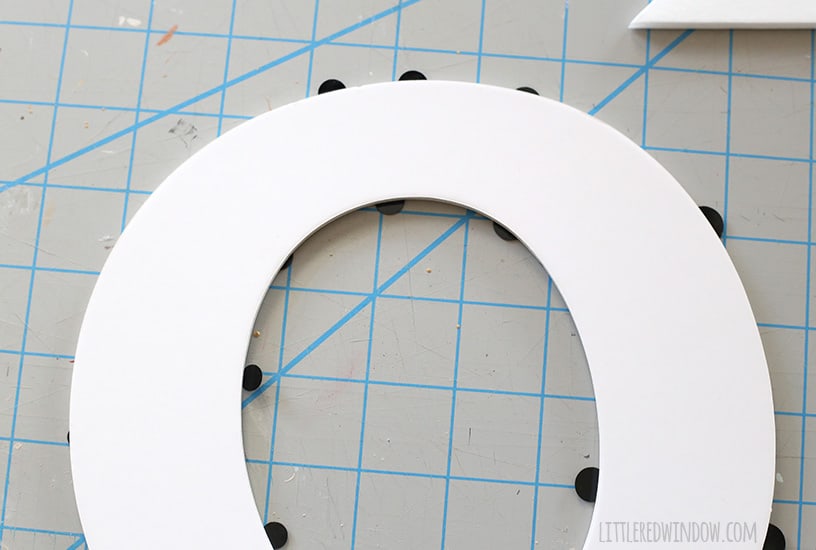 6. Now to make the background. Set your letter down on your piece of foam board and draw a starburst shape around it lightly in pencil. Then cut the shape out with a craft knife. 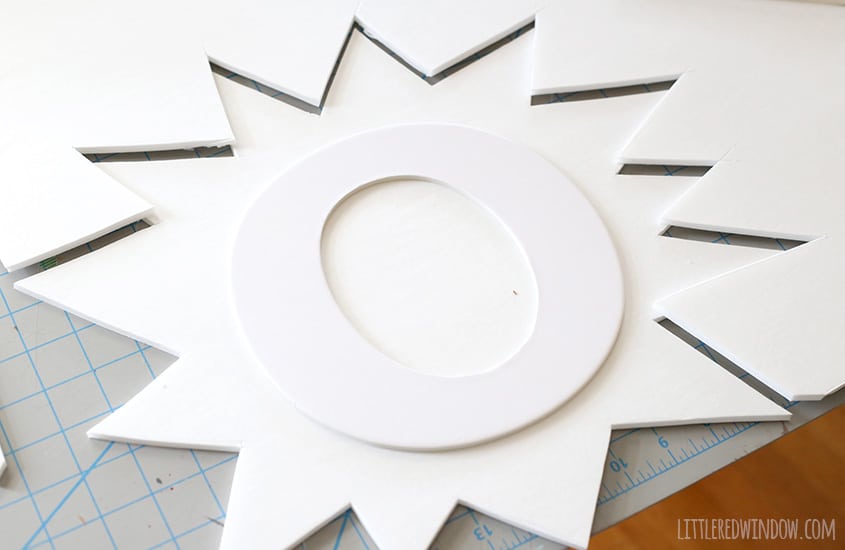 7. I decided to edge my letter with yellow washi tape to really make the colors pop but that’s optional. I just put the tape along each edge and trimmed the excess as I went. You could also paint a yellow stripe along the edge, that would probably be easier. 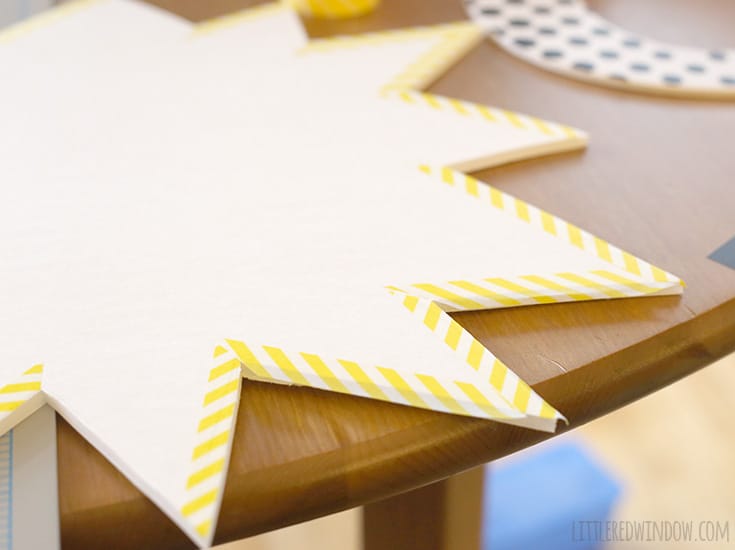 8. Then I painted in the rest of the shape with light blue acrylic craft paint. Beware, my cheap dollar store foam board definitely bowed and became concave when the paint dried. I set some heavy books on top overnight and that helped a little. If it bothers you a lot, sometimes it also helps to paint the back side as well. 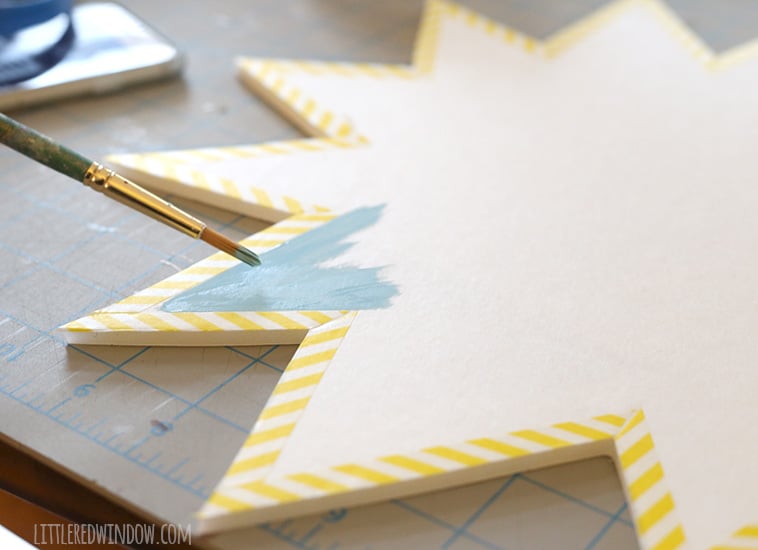 9. Then I set up more dots in a grid (this time without the ombre effect) in my Silhouette software. Again, you can totally use dot stickers. I was using 12″ x 12″ vinyl and my starburst shape was bigger than that but it turned out that there were enough dots that didn’t hit the shape that I could repurpose to fill in the spots that stuck out larger than 12″ x 12″ so it worked out. You should be able to see what I mean in second photo below.

I used the same cut settings and transferred the dots the same way by peeling off the negative space and then using clear contact paper to pick them up and transfer them to the starburst. 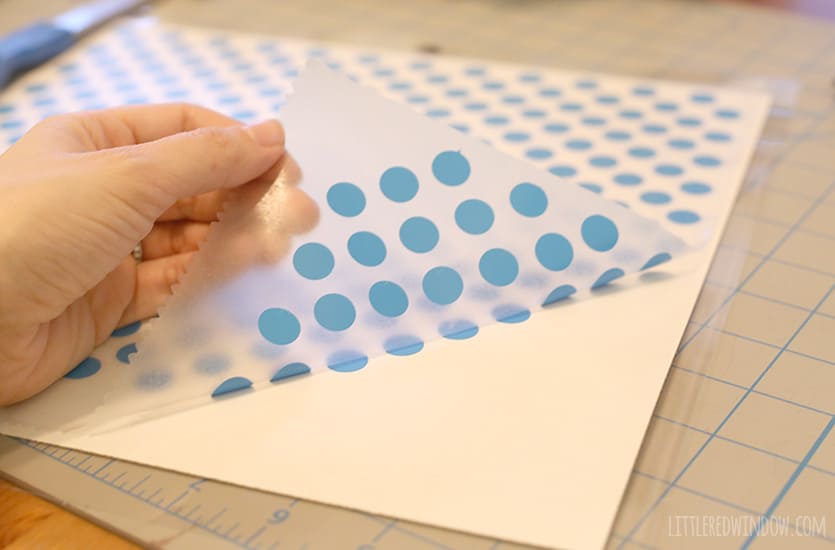 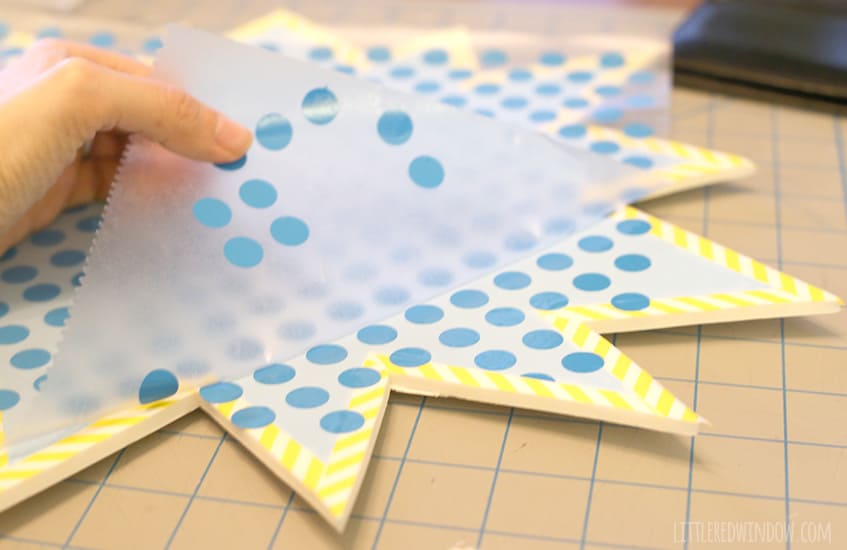 10. Then I trimmed any dots that overlapped the yellow border with a craft knife. 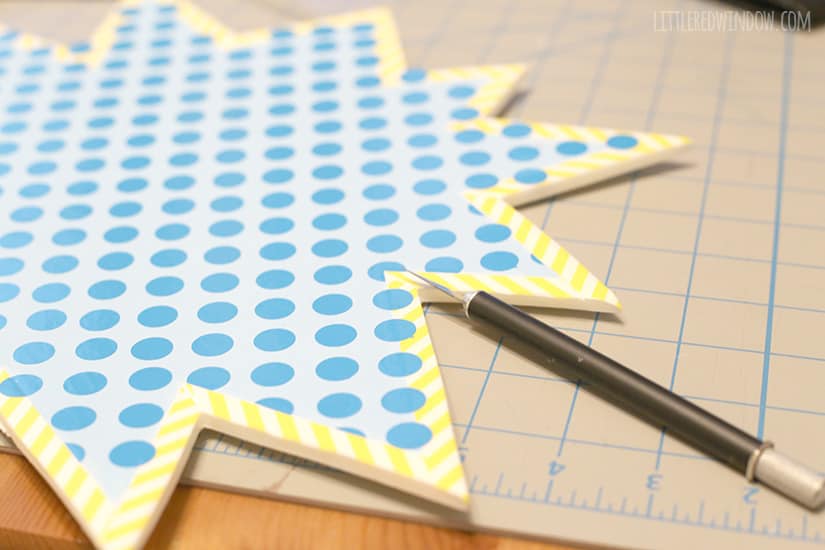 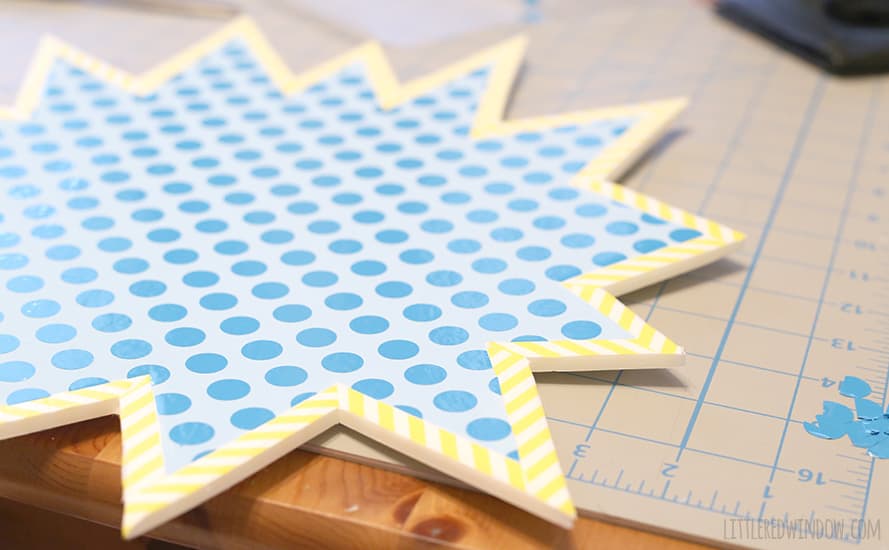 11. Then I carefully painted the sides of the monogram letter and the starburst black because comic book art always has black outlines, right? Do this step really really carefully, you won’t be happy if you smudge black paint on the front of either one… (somehow I don’t have a picture of this step, I was too busy yelling “don’t bump me!” at O,  ha!)

12. The last step is to glue the monogram letter to the middle of the starburst!  This is great for a kid’s room or nursery because it’s really lightweight and it’s super easy to hang with a command strip or two. 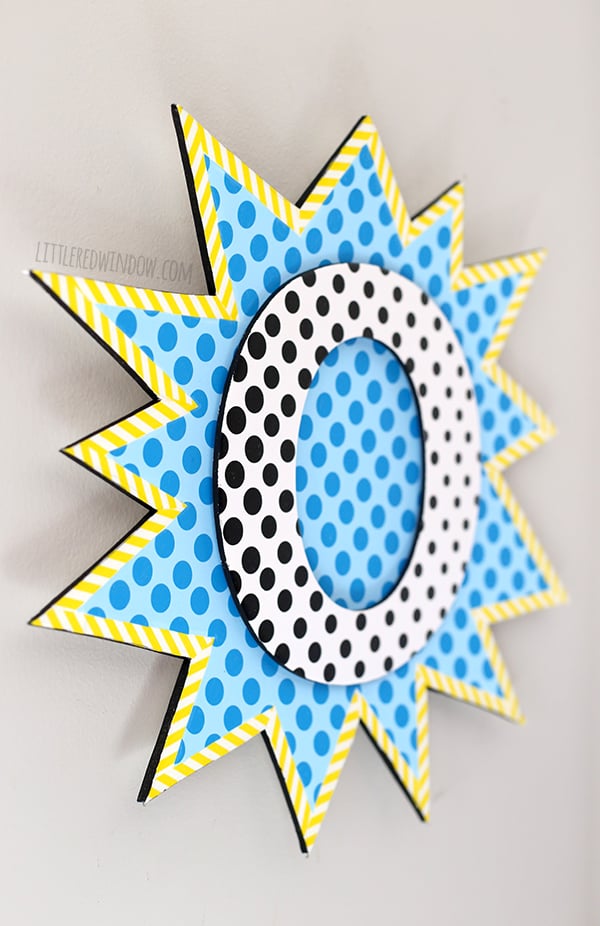 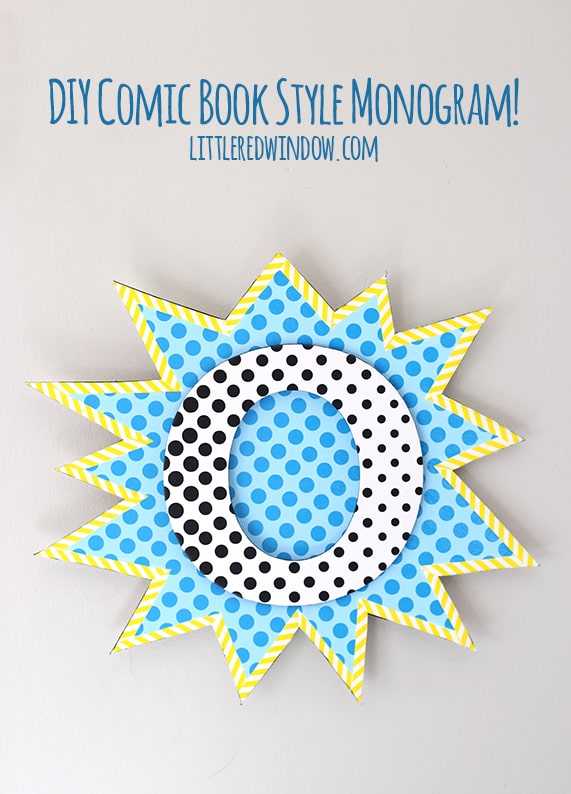 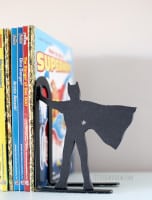