On the two days of the week that O goes to preschool in the morning, I pick him up right before lunchtime and then have to get him home, feed him lunch and get him straight in bed as quickly as possible so that his nap doesn’t happen too late. So I’m always trying to think of quick things to feed him and one thing that he’s always liked are these spinach (or broccoli) nugget things from Dr. Praeger’s. But they’re a little greasy and pretty expensive and I can only find them at Whole Foods which I don’t go to very often. So I thought, ok, it’s really just spinach and potato, I’m sure I can make my own Spinach Potato Bites.  They turned out so tasty that I keep eating them myself! Oops!

And, in the interest of keep it real around here, I should say that while Aa scarfed down several as well, O is still more into the packaged version than the homemade. Apparently I need a way to make them Spongebob shaped? Or add more sodium? I don’t know. But, if your kids are a little less picky than mine, they will probably love these and it’s a good way to sneak in some dark leafy greens!

1. Wash and cook your potatoes in the microwave until they are soft.

Run the potatoes under cold water and then pull off their skins, put them in a bowl with lots of salt and some milk (start with maybe 1/4 cup) and mash them well.  You want them to taste like good mashed potatoes all on their own so make sure there’s enough salt

2. Saute your thawed spinach with a clove of minced garlic and salt and pepper until most of the extra liquid is gone and it’s hot through. I think pre-cooking it with the garlic takes away some of that strong cooked spinach flavor that kids usually object to.

3. Mix the cooled spinach, cooled potatoes and one egg together in a bowl.

5. Bake at 375 degrees until the tops are starting to get golden brown. It took my mini muffins between 15 and 20 minutes.

6. Once they have cooled slightly, take them out of the muffin tin and enjoy! Because he’s an American child, O, of course, likes his best with ketchup! 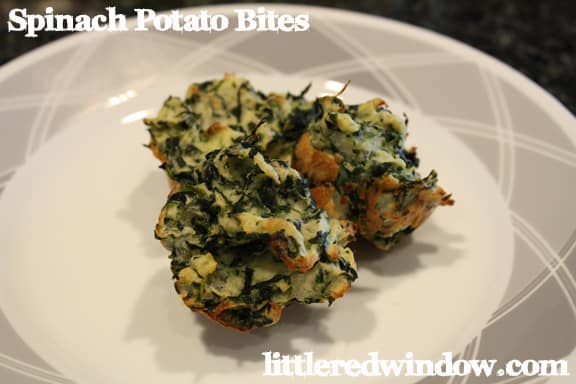 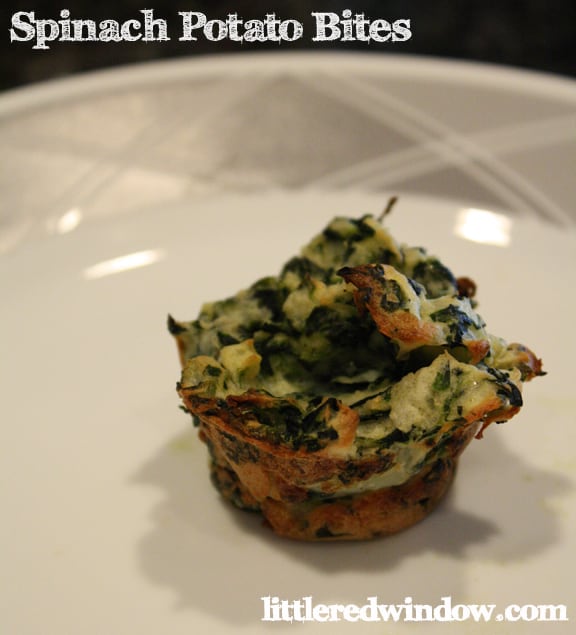 These also freeze great! Just pop them in a freezer back and reheat in the microwave!