Make your own simple King Friday inspired costume so your little one can pretend to visit the Land of Make Believe, a cute costume for everyday play or Halloween! 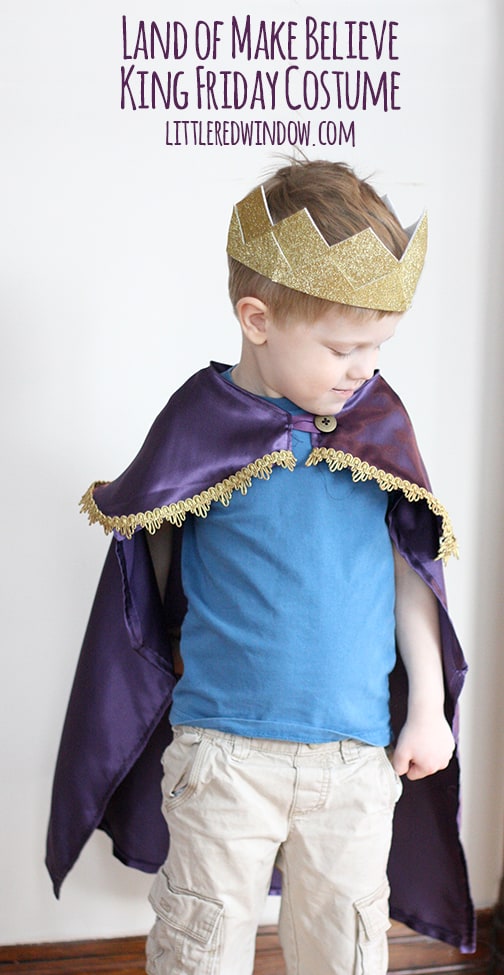 Can we talk about children’s television shows for a minute? I know all families have different policies about what and how much their kids watch. And that’s cool. It also depends on the kid and what they like and can handle. We try to limit tv time as much as possible and O is pretty sensitive and easily scared so we stay away from a lot of shows. But man, it is hard to find simple shows for a 3 or 4 or 5 year old that don’t have any violence or inappropriate language AND are at least sort of educational. And I feel like there are a ton of shows for little toddlers and a ton of shows for older kids, but a big hole for the age we’re at right now. I know my kid is totally not ready for spongebob or superhero squad. But then a lot of his friends watch those shows so he wants to too. But Aa and I decided we don’t think he’s ready so that’s our rule. He was watching a lot of things like Postman Pat and Fireman Sam but while those shows are cute and funny, I would like him to be learning something. So I was pretty glad when I found Mr. Rogers on amazon prime AND he actually liked it.

An aside: we had actually tried watching Mr. Rogers about a year ago. This was when we still had cable and I had just randomly tivo’d an episode for him. I was so excited because it was one of my all time favorite shows so I turned it on and then went over to the kitchen to make dinner or something. I came back 5 minutes later to find Mr. Rogers saying, ” and sometimes Mommies and Daddies don’t love each other anymore and so they don’t live together…” and O looking on with wide alarmed eyes. Because of course of allll the gazillion episodes of Mr. Rogers, I had tivo’d the divorce episode. Probably a wonderfully helpful episode if you need it but when you don’t, it’s just confusing!

Anyway, so he’s been watching Mr. Rogers lately and LOVING it. He sings the speedy delivery song and the other day he showed up in my office in his mailman costume saying, “I have a speedy delivery for you! It’s a video for your picture picture!” It’s extremely cute. But the #1 character he likes to be is King Friday. He likes it so much that for a week he insisted that we call him King Friday, that I be called Queen Sarah, and that his dad be called Prince Tuesday. And then he’d boss us around and expect us to say, “Correct as usual, King Friday!” (actually this is not so different from normal 4 year old behavior, right?!) So when I was in the craft store the other day I grabbed a few supplies and made him a quick King Friday inspired costume. This is fun for everyday play or would be a great Halloween costume!

Here’s how I did it: 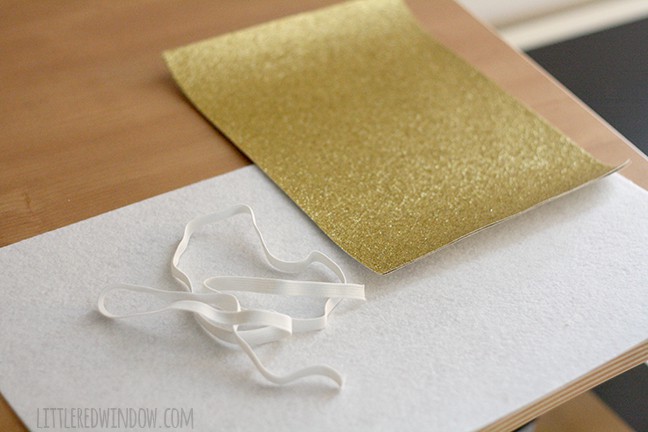 1. On the back of your stiffened felt, draw a drown shape, make the middle front taller. 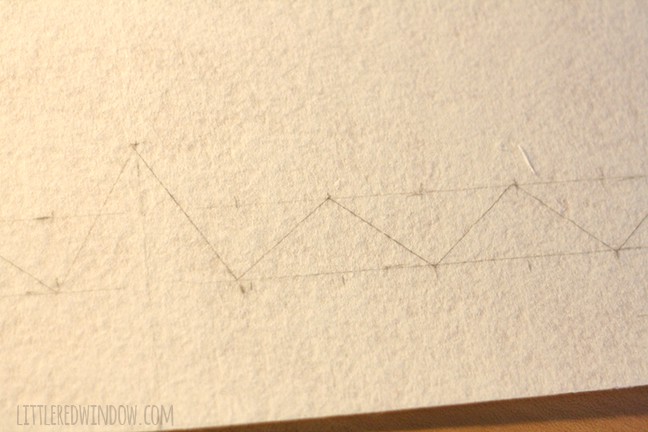 2. Flip the stiffened felt over and use the craft glue to glue on the glitter fabric covering the area that will be the crown. If you have a seam, just try not to put it right in the middle. The seams are pretty invisible in the glitter. 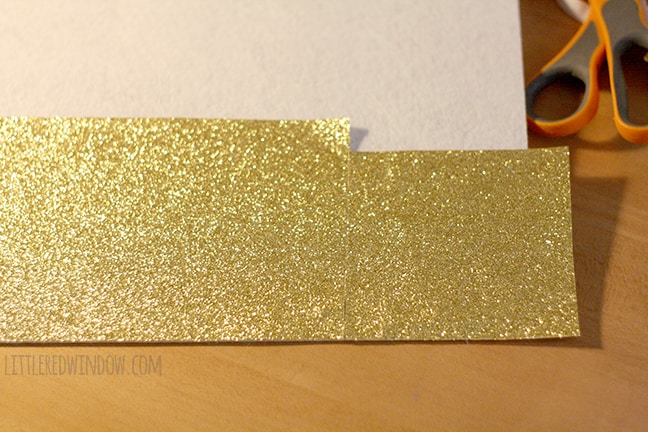 3. When the glue is dry, cut out your crown with fabric scissors. 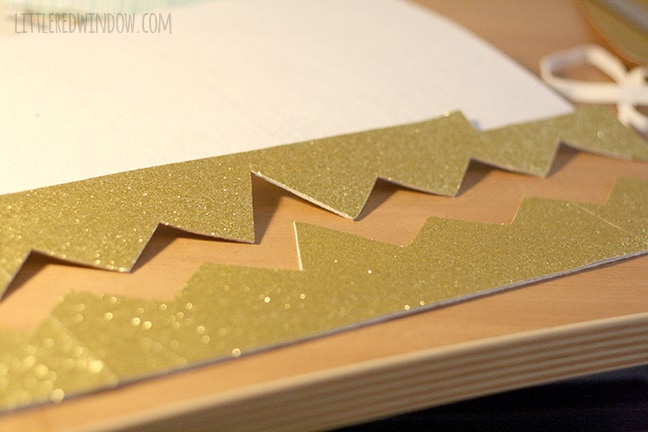 4. Then cut across the scrap side where I’ve shown the red line. 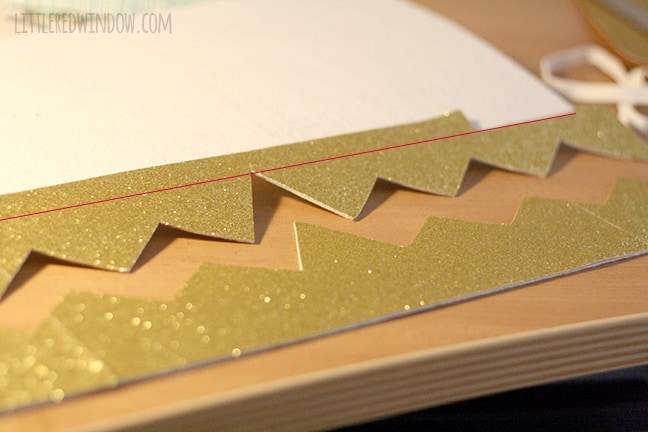 5. Use some craft glue and glue the scrap pieces to the front of the crown to make a second shorter row of peaks. 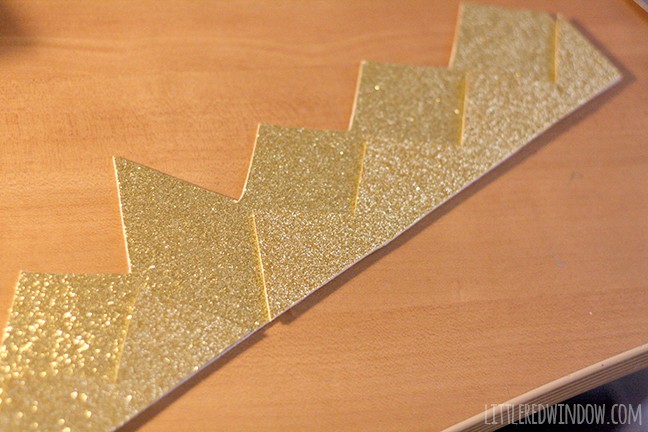 6. At this point, measure your child’s head. For smaller kids, the 18″ length of the crown might be enough, but my kid has a huge head so we needed to add about 4 inches of elastic at the back. When the crown is completely dry, you will probably need to gently work it and bend it a bit to make it round, the glue between the layers can be a little stiff.  I cut the elastic and then I inserted the end of the elastic between the two layers of the crown at the end ( I hadn’t glued that part yet). I used a stapler to attach it, making sure the ends of the staple are inside the crown. 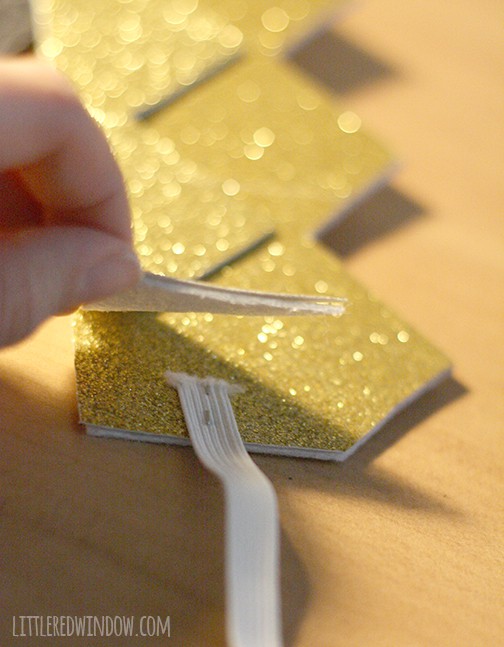 If you flip it over you will see that because the stiffened felt is still kind of soft, the other side of the staple is embedded and shouldn’t bother your little one’s skin.  Then finish gluing the two layers of crown together and let it dry overnight. 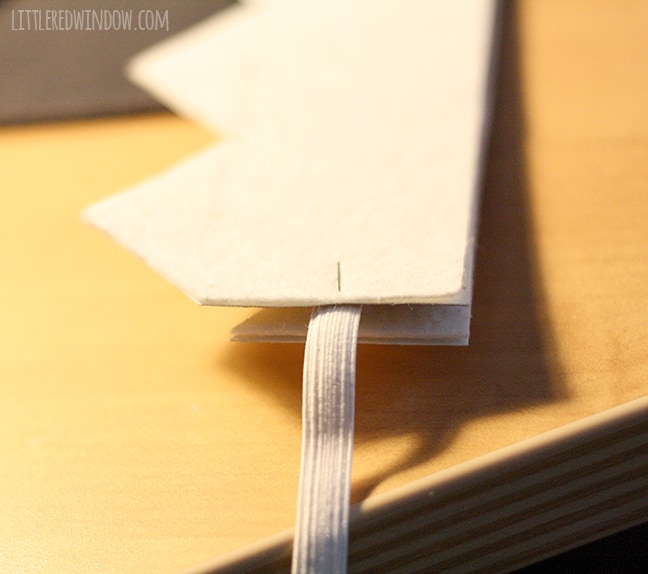 3/4 of a yard of purple poly satin

A little bit of grosgrain ribbon

I really really wanted to use iron-on seam tape and make this a no-sew cape but because it was polyester, I was worried that an iron hot enough to make the seam tape stick, would also melt the fabric. So I sewed it. But if you have different fabric, by all means, try that method and let me know how it goes!

1. I laid the fabric out on the floor and cut it into an even rectangle. Mine was about 25″ wide by about 36″ long. But the length will depend on how tall your kiddo is. 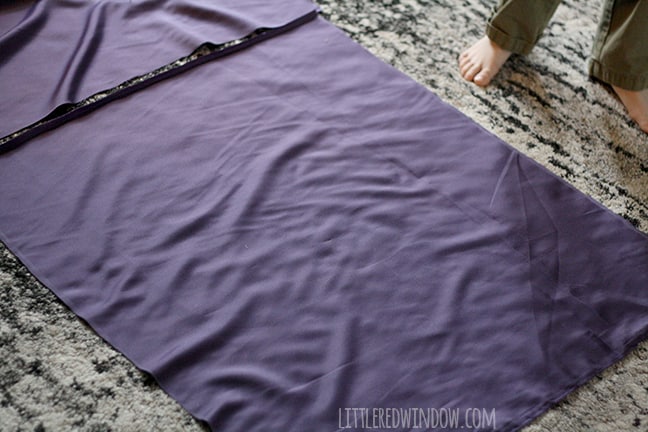 2. Next I measured in 5″ and down 12″ on each side and cut off the corners to taper one end of the rectangle. 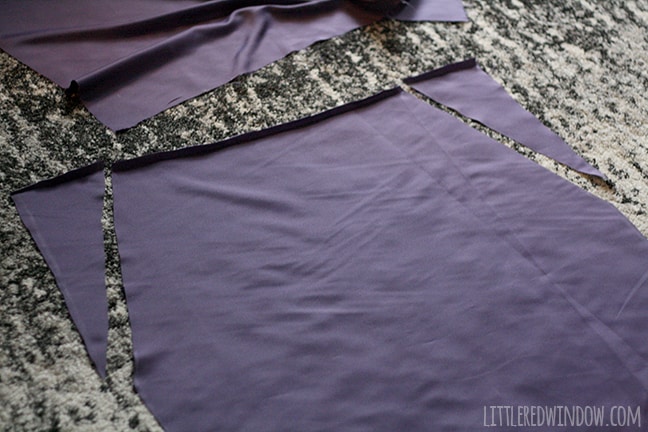 3. I used a dinner plate in the center to trace the neck curve. This formed the basic shape of the cape. 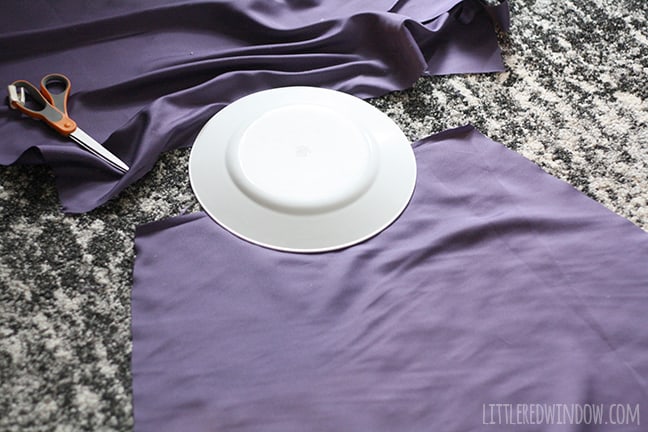 4. Then I needed to make the capelet that goes on top. It has the same neck hole and tapered edges as the regular cape, it’s just a lot shorter, so if I’d been thinking ahead I would have cut them out at the same time. But I just used the first cape piece to cut the capelet instead. 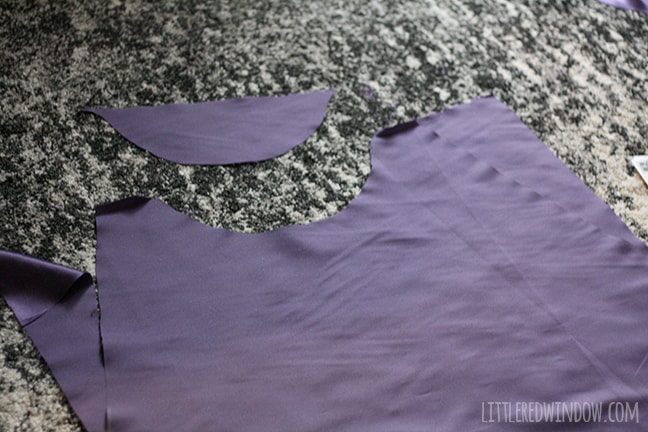 5. Then I cut the capelet about 12 inches long in a curved shape along the bottom. 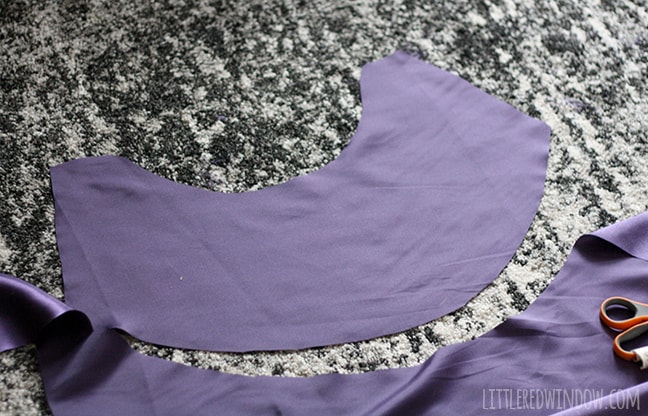 6. The next step is to hem all the edges of the main cape piece except along the curved neck line with a 1/2 inch hem. 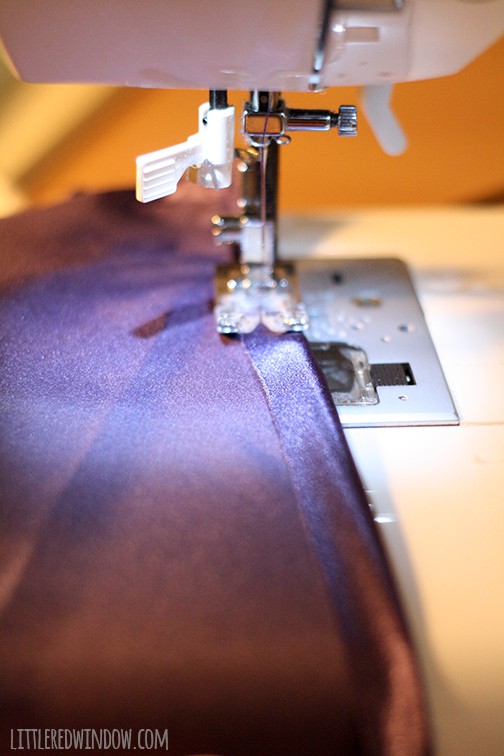 8. Lay the hemmed cape down and put the capelet on top, both right side up. 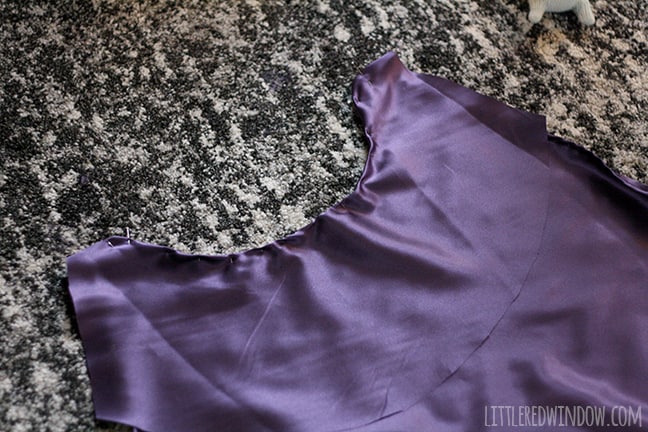 9.Fold in and pin a 1/2″ hem where I’ve shown in red. Be sure to sandwich a loop of ribbon on one end for the cape closure. 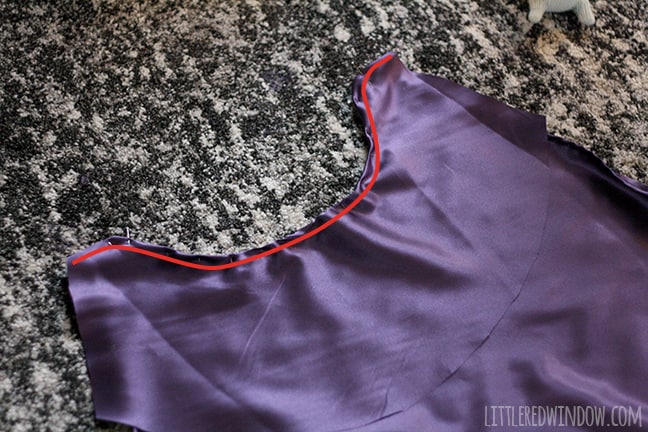 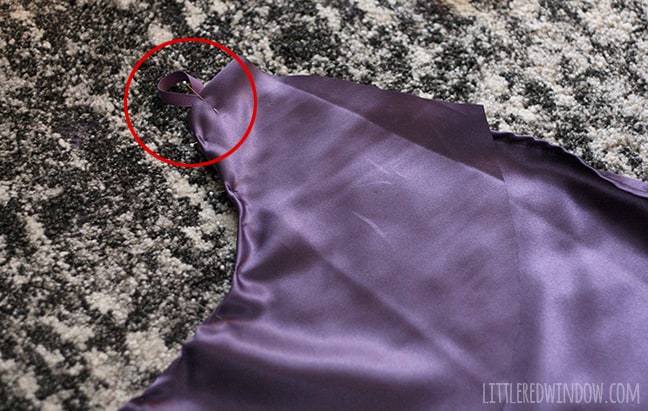 10. Sew along that edge through both layers of fabric to attach the cape and capelet. Then sew a button very securely on the opposite side from the ribbon loop. 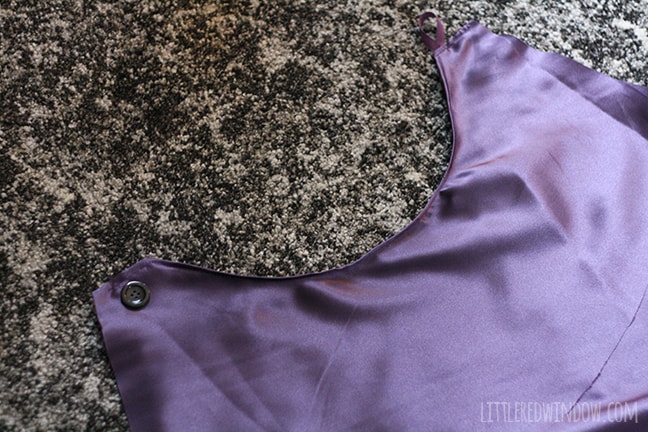 10. I did not hem the other edges of the capelet because, if I can be honest, I didn’t feel like it. And I figured the trim would cover it. But you can if you want. Next I attached the gold trim around the edges of the capelet. I just handstitched it on every 1/2 inch or so but if you have a strong sewing machine you could use that too. 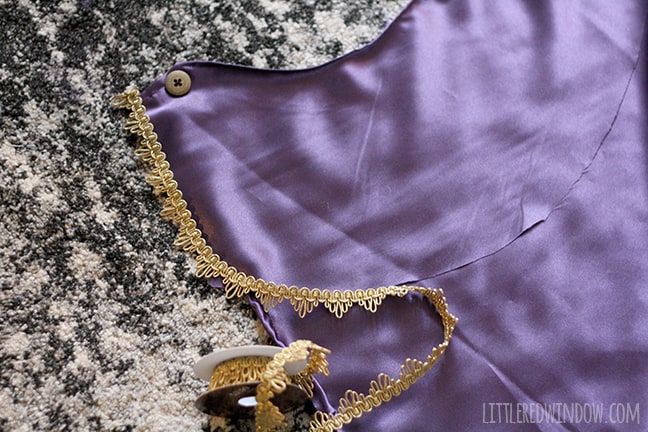 And that’s it, you’re done! We left off the white fur trim that Kind Friday has because O told me he didn’t like it but I was thinking quilt batting would work well for that (and be cheap).

Add a blue tshirt underneath and your little one is ready to hop on the trolley to rule the Land of Make Believe! 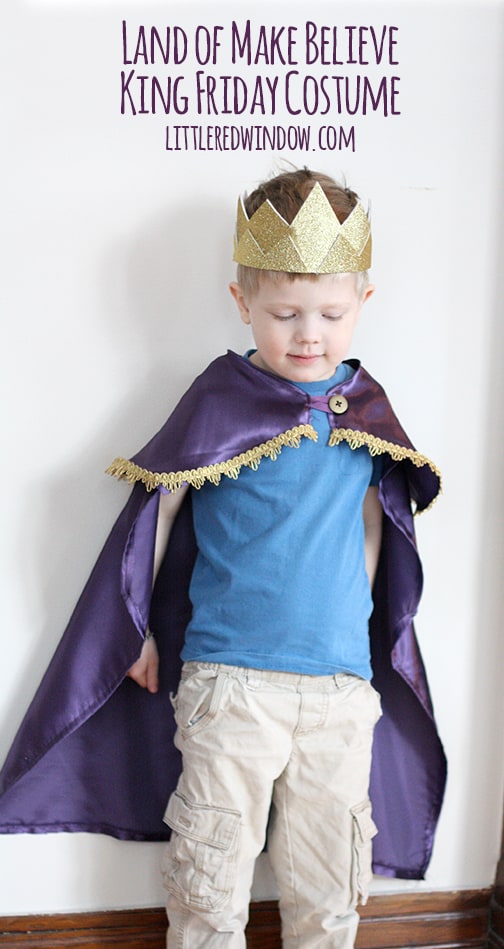 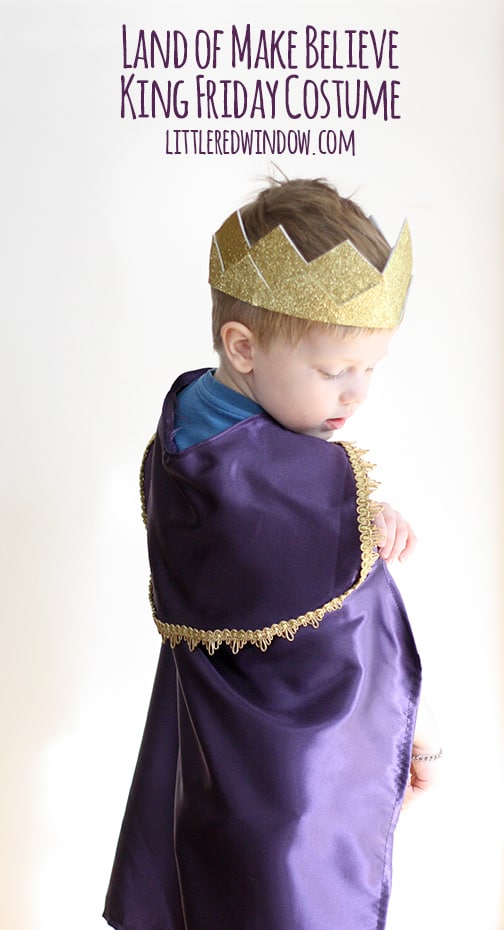 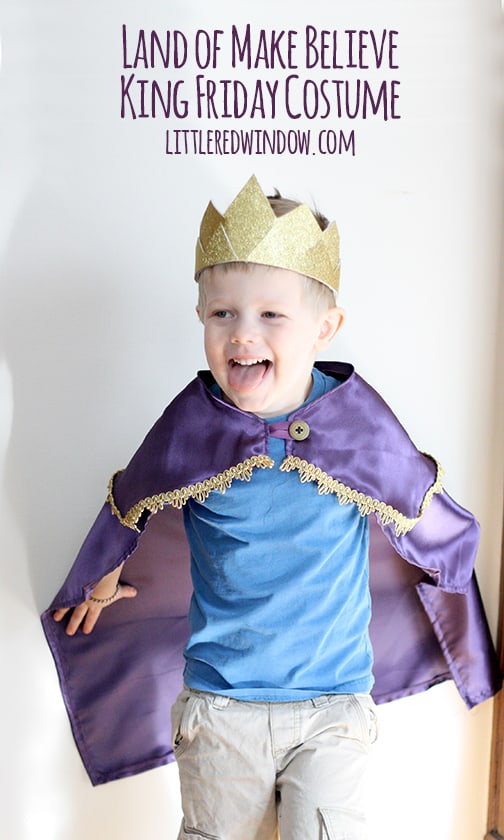