Until about a year and half ago, we had two wonderful cats. (Trust me this story is going somewhere…)  We got them from a shelter when we first moved to Chicago when they were six weeks old and completely adorable.

They were brother and sister and we named them Yuko (left) and Hiro (right) after some friends we met in Japan and we totally loved them like children.  (So of course you can see where this is going…)  Overall they were really great cats, although Yuko was amazingly smart and used it to her advantage.  This cat could literally open fully closed doors.  She could also open dresser drawers and liked to climb inside and nap on top of our clothes.  She accomplished this by leaping up, hooking her paws over the top of the drawer and leaning back and letting her chubby belly weight open the drawer.  Then she’d scramble up into the drawer and get cat hair all over everything. It drove us nuts!  (The silver lining was that we got pretty accomplished at baby-proofing way before we ever had a baby!)

Unfortunately after O was born we found out he has asthma and allergies–serious enough that he spent the night in the hospital for breathing problems at nine months.  And when we saw an allergist when he was about a year, the doctor said, “You have no choice, the cats have to go.” It was truly heartbreaking but in the end, in the best possible scenario, they went to live with some really great friends of ours (I literally called them the WEEK BEFORE THEIR WEDDING to ask if they would take the cats and they didn’t hesitate, just said yes.)  And now they are adored and spoiled and so happy. So in the end, we miss them terribly but it’s ok. (And we can still visit!)

Anyway, the dresser Yuko climbed into most often was an Ikea Tovik dresser I got when I was in grad school.  It looked like this originally except that it had five drawers.

I had painted it a dark eggplant color but after several years of a chubby cat climbing up and down the front it was pretty much ruined. I don’t have a picture of it but trust me, it wasn’t pretty–lots of deep scratches and peeling paint. When O moved from his tiny nursery into his big boy room I decided to drag this dresser out of a closet where it was holding sheets and towels and turn it into his big boy dresser. I searched Pinterest and found some inspiration.  I liked this a lot:

I also thought this was so inspiring but didn’t think the bare wood of my Tovik was nice enough to show off in any way.

And then I saw this one and I was in love.

So I sanded and scraped and sanded some more. (Yes, I do this inside my condo, I just vacuum a lot. And it helps that we have flooring that I’m not particularly worried about).  And then I gave it a couple coats of primer and then a few more coats of a dark grey paint with a small roller.  And then I went to town with a white paint pen from Michaels. Well, it took three or four paint pens actually.  And I finished off with a couple coats of poly (because toddlers aren’t known for being gentle). 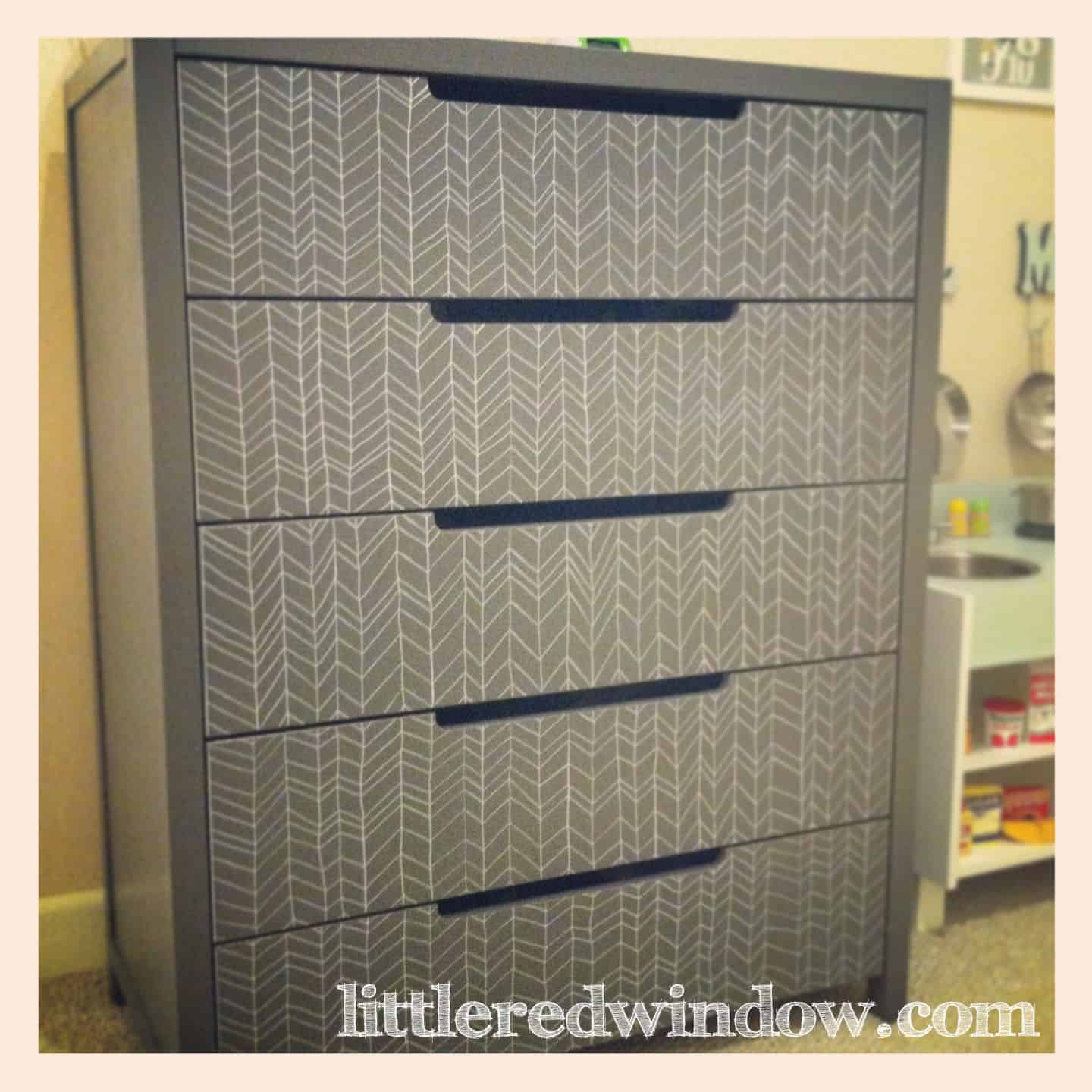 In the end I’m totally happy with the result and I hope the hand-drawing is playful enough to work for a toddler’s room but with a sophisticated pattern that should continue to work as he gets older.

(I have to apologize for the photos, O’s room is small and actually doesn’t have any windows at all which makes light a BIG challenge! What do you even do in that situation?  Maybe a more dedicated blogger would move the dresser to a room with a window?  Sorry, I have a toddler, I don’t have time for things like that! Hopefully you can forgive me!)