After conquering eggplant, I started to wonder if there were other vegetables out there that maybe I wasn’t giving a fair shake. I have a definite aversion to mushrooms (a vegetarian that doesn’t like mushrooms?!?!) but I’m not ready to take that on yet.  So next I thought I’d try cauliflower. I roasted it a bunch of different ways and was definitely on the cauliflower bandwagon when I started seeing recipes for cauliflower pizza crust on Pinterest. Maybe I’ve been reading too much Pintester, but I thought, is it crazy enough to work??  I mean, it sounds weird and too good to be true. A pizza crust that’s low-carb but still tastes good?! Turns out it’s delicious and not too hard. It’s so popular at our house that Aa asked for it for his birthday dinner last week (and he is decidedly NOT a vegetarian!)!  Even O eats it which is saying something!

It is not going to be the kind of pizza you can pick up (that’s the part of the Pinterest pins that’s too good to be true) but after a lot of trials and some error I’ve come up with a recipe that holds together pretty well and tastes great!

1. Preheat your oven to 400 degrees. Cut your cauliflower up into small florets. (Does anyone have a way to cut up cauliflower without making a giant mess? Seriously! No matter how careful I am it always looks like it snowed in my kitchen when I’m done!) Don’t use precut bagged cauliflower, I don’t think it tastes as good.

2. Pulse it in the food processor until it’s roughly the size of rice.

3. Put it in a microwave safe container and microwave for about six minutes.  When it’s cool enough to touch, pour it into a clean kitchen towel, and twist to get out as much liquid as you can.

4. Put the cauliflower in a bowl and add the dried herbs, salt and cheese

6. Add a few tablespoons of olive oil to a cookie sheet and form the cauliflower mixture into small circles (4-6 inches in diameter).  Make sure they are even thicknesses.  Most recipes like this make just one pizza but I found that that smaller pizzas are a lot easier to get onto a plate in one piece. Plus individually sized food is always more fun!

7. Bake for about 20 minutes until it starts to get golden brown on top.8. Add your topping and put it back until the oven. We like cheese, kalamata olives and fresh basil.

8. Bake until the cheese is melty and bubbly.  Use two spatulas, one on either side, to carefully move the pizzas to a plate. 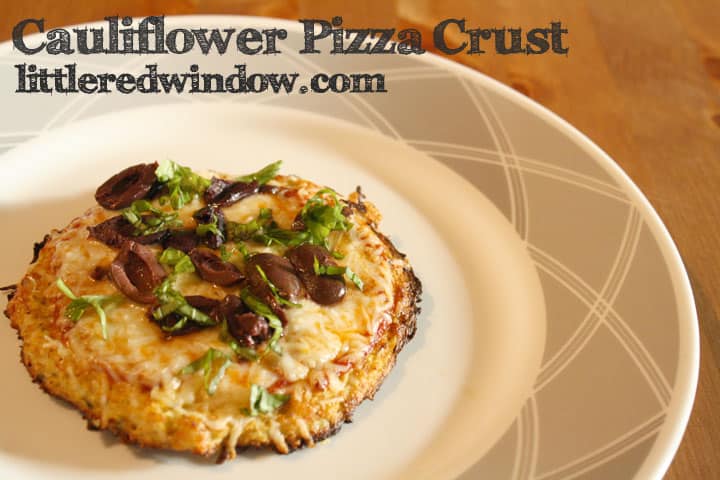 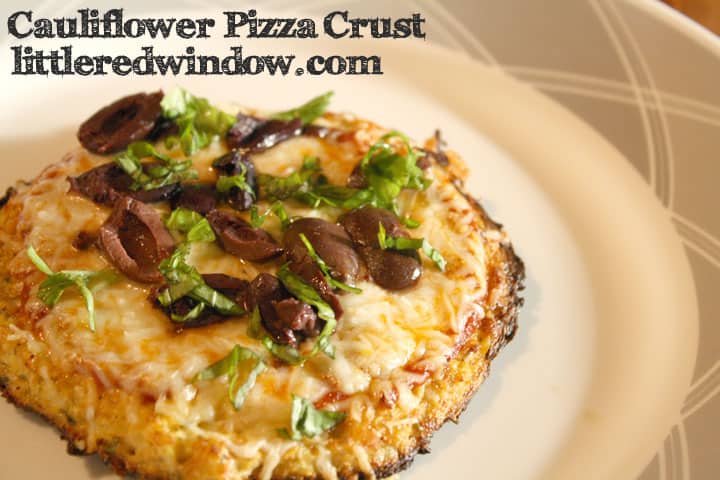 « What Are Printables and Why Are They Awesome?
Apple Tree Felt Board »