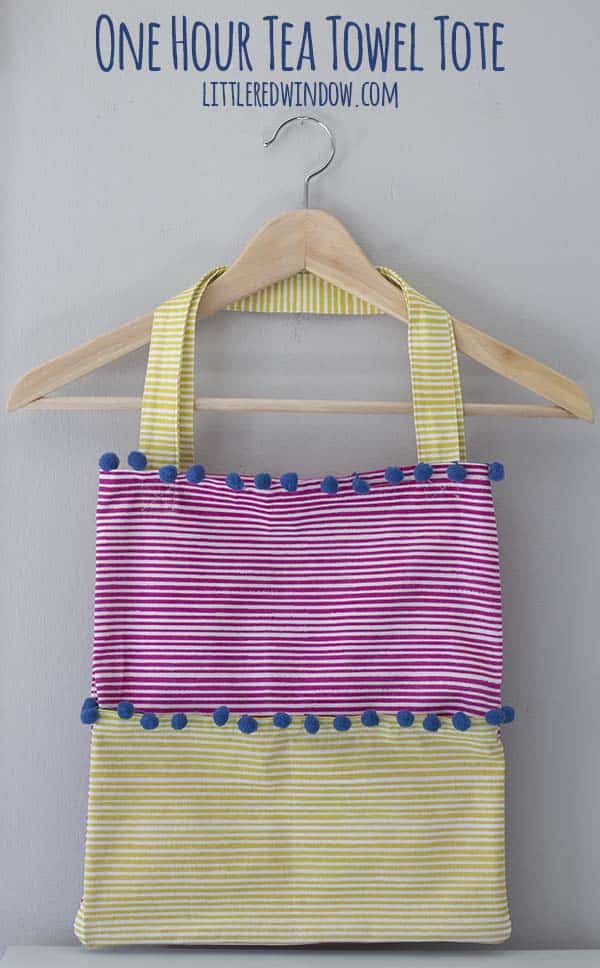 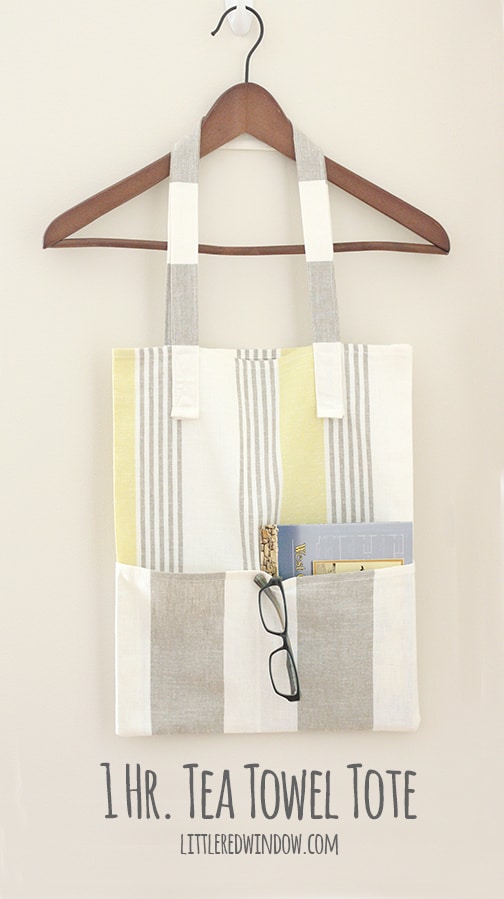 I think one of the things that fascinates me about O when he was almost 5, is how much he thrived on routine. I know they say that about all kids but I would imagine it varies depending on their personalities. And O really likes routine. For example, when we go to the library we always put our books in the same specific “library book bag” which, when not in use, hangs on the back of his bedroom door. And heaven help you if you try to put something else in the library book bag or return your books another way. Because that is just not right! (I totally get it because I’m the same way.)

But luckily he also handles more large scale changes pretty well, it’s an interesting mix of me and my husband. A one-time misuse of the library book bag is a big deal, but if we sit down and talk about how we’re going to use a different bag for books from now on, as long as we stick with that, he’s totally and completely fine.

And that is, in fact, what we did recently, because the old library book bag was a random reusable bag from a certain clothing store that had their logo ALL over it. And I am soooo not a logo person. I really hated carrying around that bag. I know that’s silly. But it was just ugly. I’m not going to throw the bag out or anything, just use it for something else, like carrying sand toys to the beach or something else where I don’t have to see it constantly.

So a new tote bag was in order. Enter the IKEA tea towel! (Or the two cute Opal House towels I snagged at Target for the pink and yellow version!) I decided to whip up a bag and make it as simple as I could to share with you. It’s not quite as easy as my 3 Seam Drawstring Bag but it’s close! And by using tea towels there’s very little cutting, very few seams, and the inside looks nice without lining! It’s the best! Here’s how I did it:

2 Tea Towels (these would be cute!)

1. I bought these tea towels from IKEA: 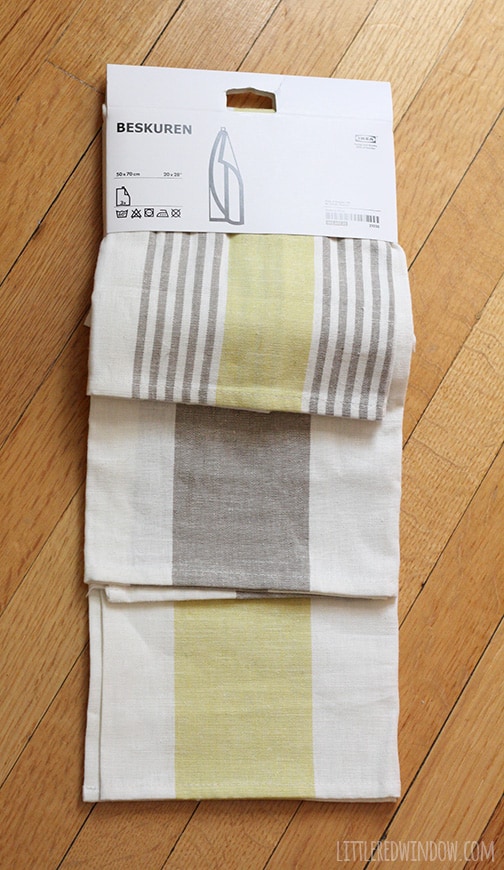 Who else loves the names of things at IKEA?! Are they nonsense words? Do they mean something in Swedish? Who knows? All I know is they are impossible to remember! But these Beskuren towels are super cute.

(For the other version, I used two cute tea towels with pom pom trim that were on clearance from Target’s Opal House line) 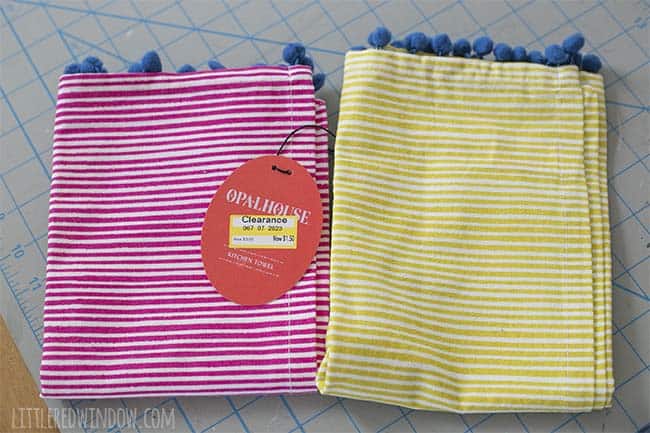 2. Cut the tags off your towels if they have them. (Why are IKEA tags soooo huge?!) 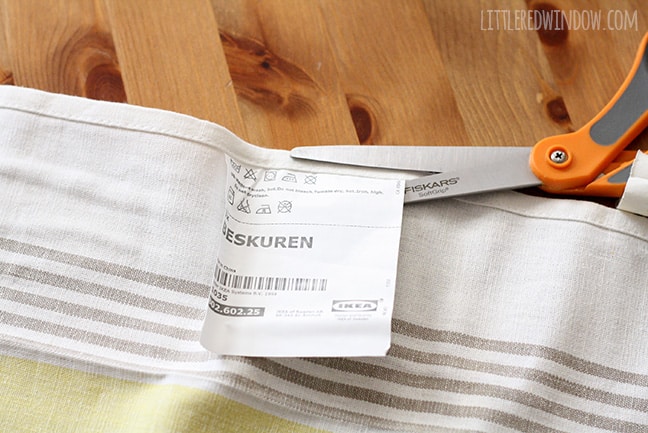 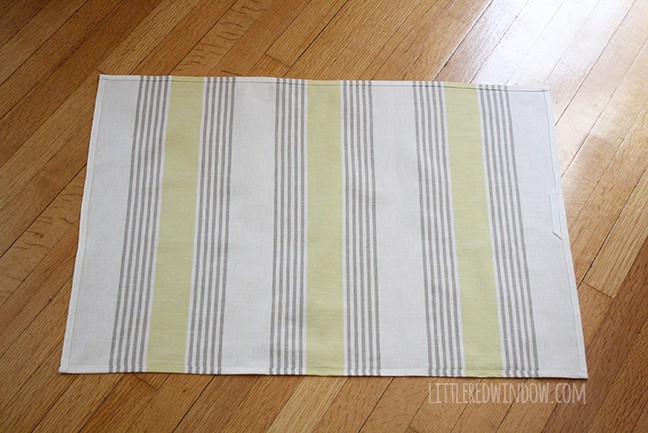 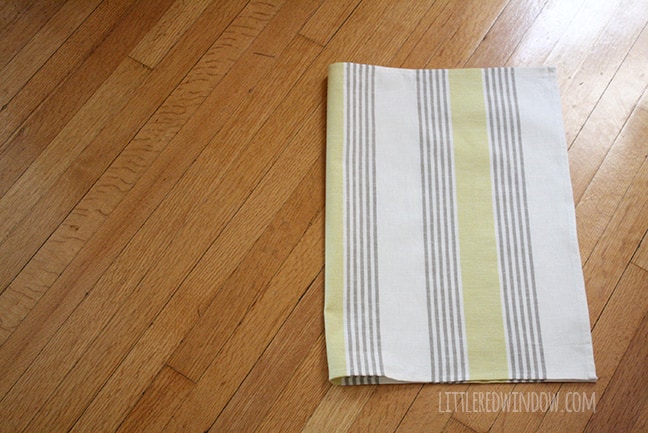 4. I cut off about 3 inches from the bottom of my bag because I didn’t want it to be quite so tall and skinny. This step is optional and depends on your preferences and the size of your tea towels. 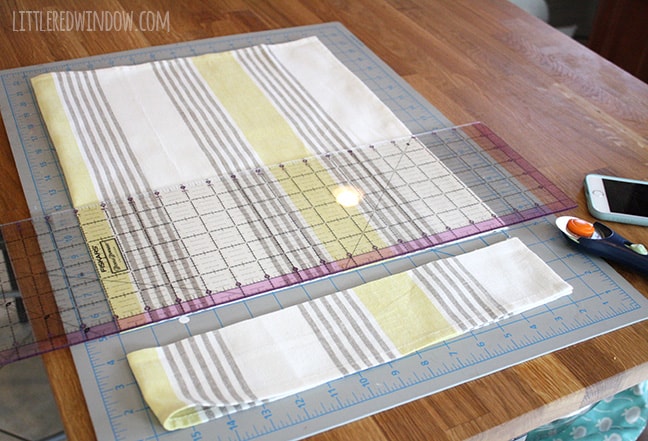 5. Then, using one of the other coordinating towels, I cut a 7″ strip off one side (so the strip was 7″ x 28″). I laid it in on top of the main fabric both right sides DOWN and pinned it in place. This will be the outer pockets. 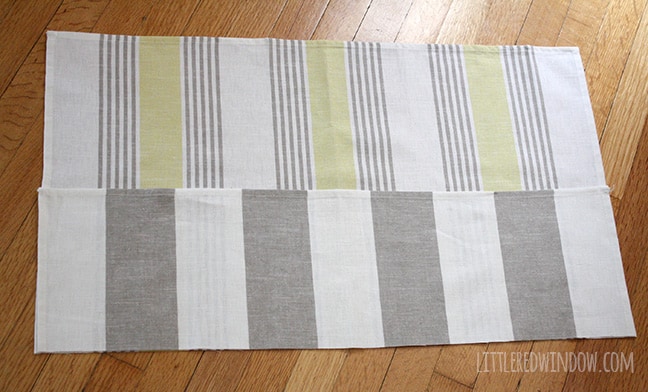 6. Sew 3 short vertical lines as shown to divide the pockets. 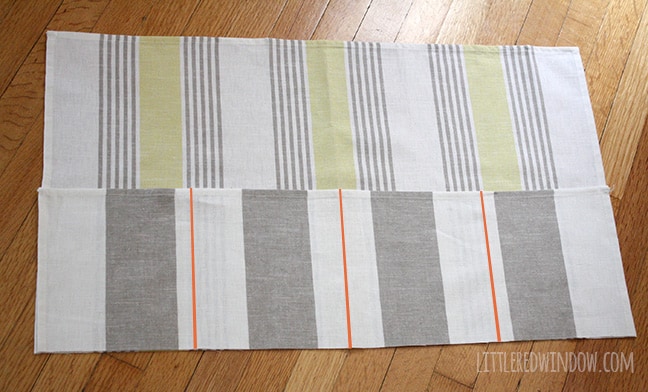 7. Now fold the bag in half again, right sides together (the pocket will be inside). Pin. Then sew as shown, you do not need to sew along the folded edge. 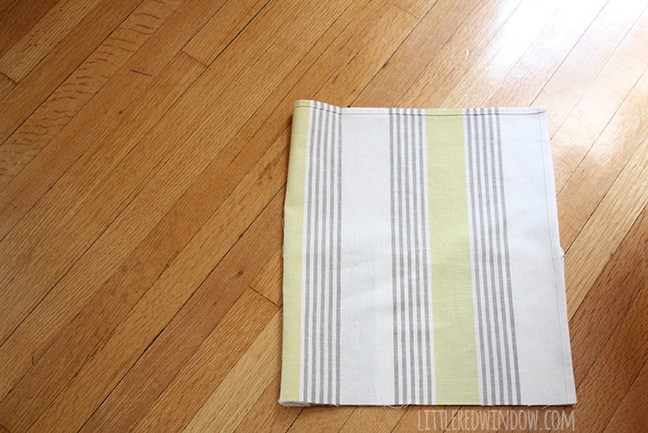 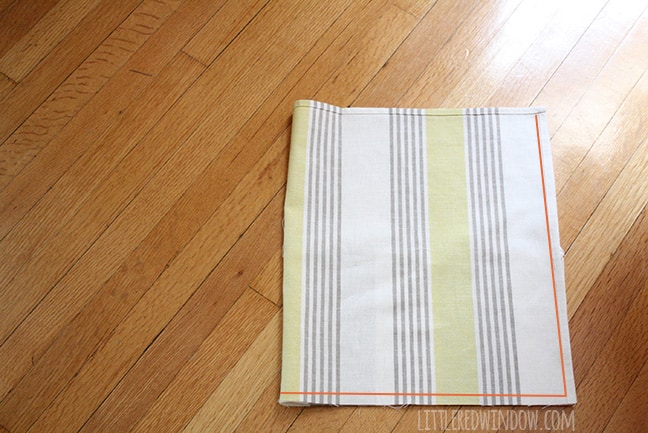 8. I usually sew a double line of stitching along the bottom edge of a bag like this to make it stronger. This is especially helpful if it might hold something heavy like books. 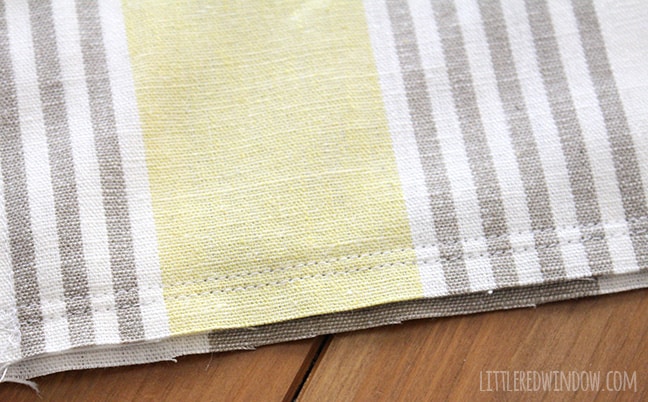 9. Then clip the bottom corners being careful not to cut your stitching. 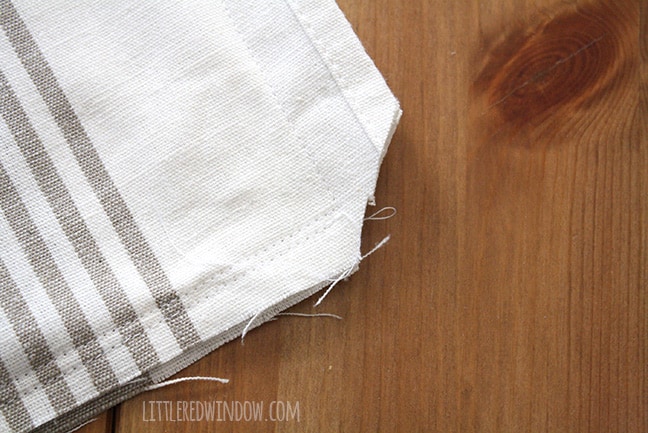 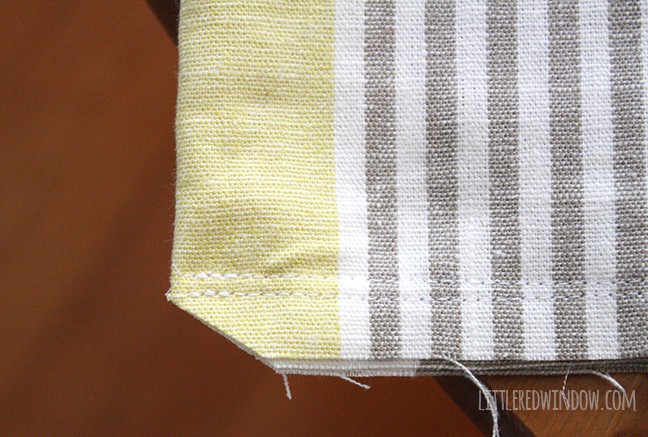 10. Turn your bag right side out and press! 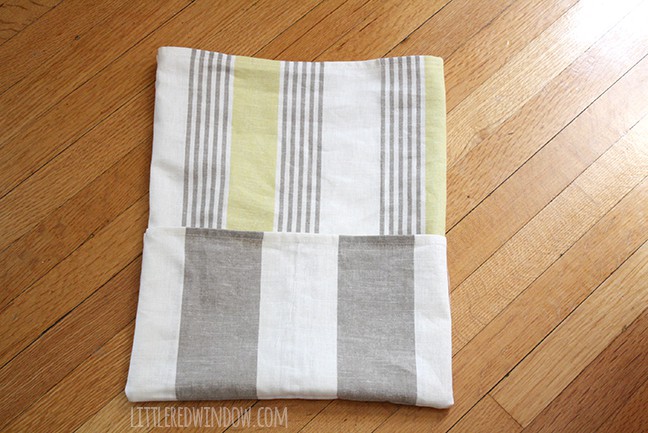 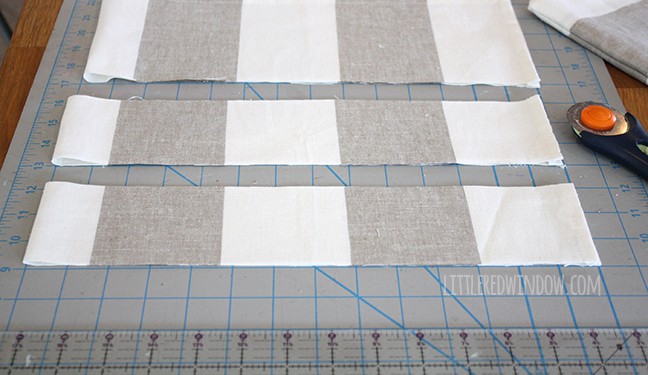 12. Using a hot iron, fold each long side of the straps in 1/4 inch and press.  Then fold the entire strap in half again (the long way) and pin.

13. Topstitch the length of each strap along both edges. 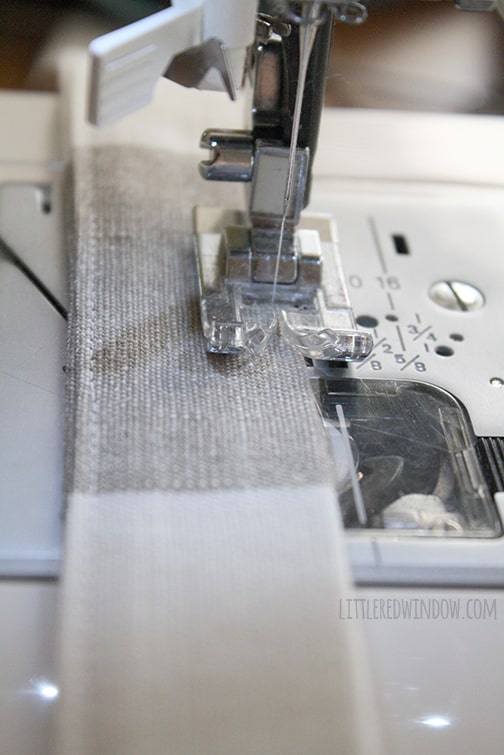 14. Place the first strap on the outside of the bag where you want it and pin in place. Then stitch it to the bag around the edges and with an X to secure. 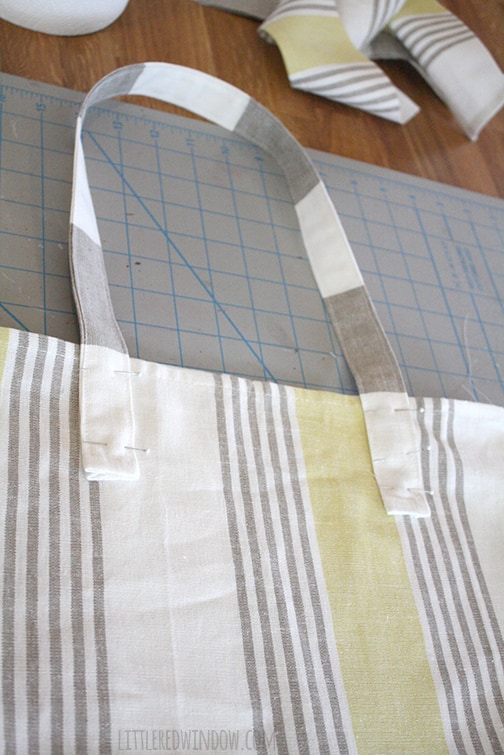 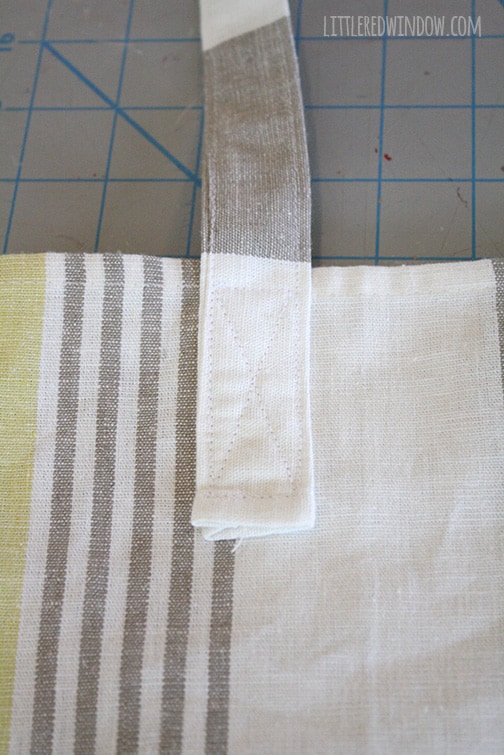 15. Repeat with the other strap. 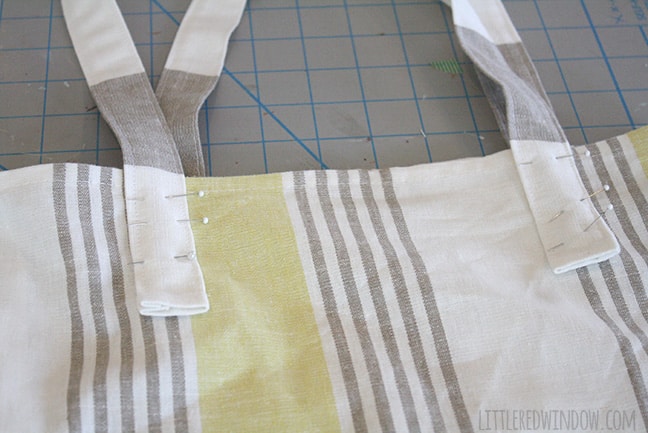 Iron your tote again and you’re done! A cute little Tea Towel Tote in under an hour! And because you used all the finished edges, it was so easy! 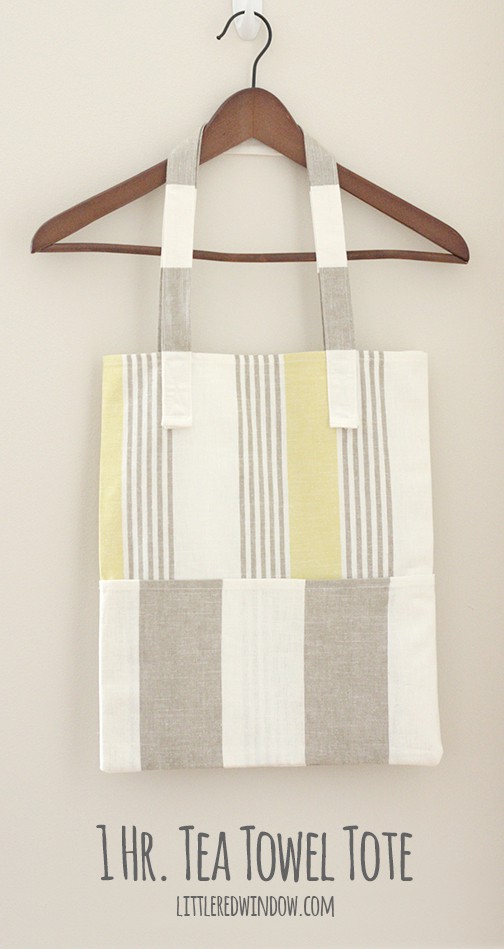 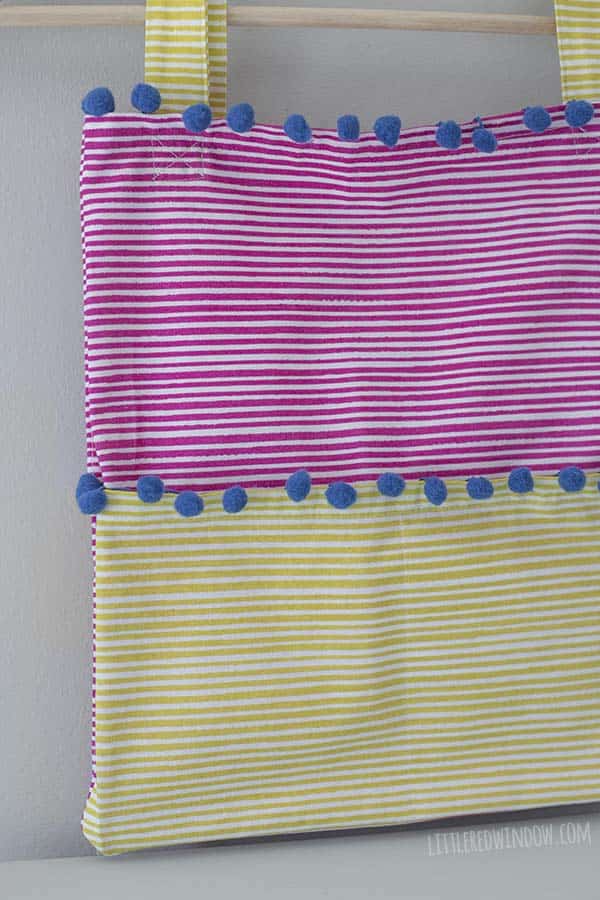 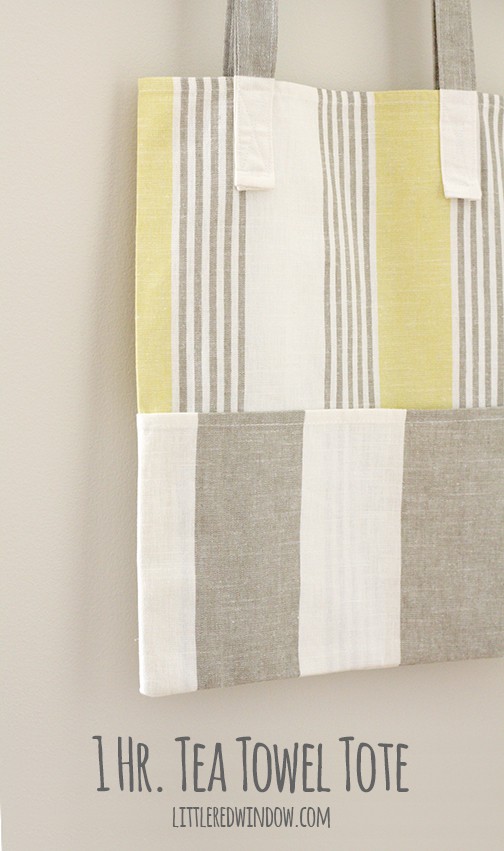 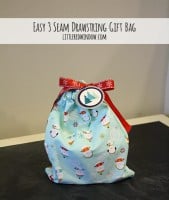