Make a cute Remote Control Basket with hand painted outside and easy no-sew fabric lining for your living room! – littleredwindow.com 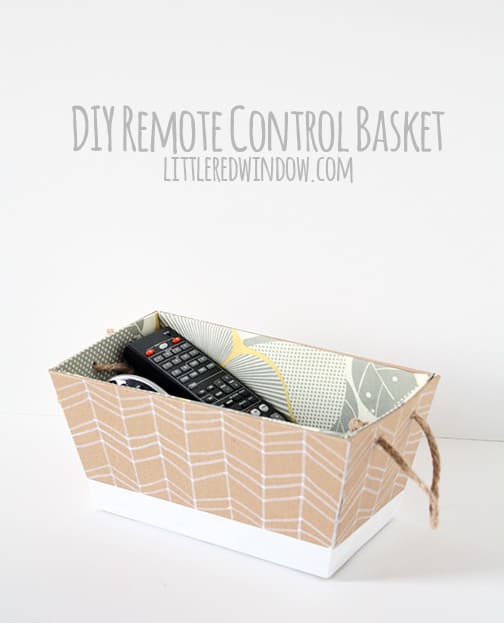 Well, a while ago, we made a big change around here. In fact, I should thank you, friends. A couple of months ago I asked on my facebook page (follow me over there for lots of great ideas that you won’t see here!) how most of you watched tv. I was wondering if you had cable or satellite mostly. And I was completely surprised how many of you responded that you had neither and only used broadcast or just had netflix and watched things online. And the consensus was that none of you missed cable at all!

I had been wanting to ditch cable for a while but Aa was a little more reluctant because, you see, he is something I like to call a “red-zone-aholic.” Are any of you familiar with Red Zone? If not, it’s a special football only channel that shows every single touch down in every single pro football game every week in real time. So often there’s a split screen showing 3 or even 4 games at one time. It’s intense. But Aa loves it. And we always laugh because it’s a special channel you have to order from the cable company and it comes as part of a package that for whatever reason also includes Lifetime Movie Network. Which is hilarious. I can totally imagine that the cable company had a meeting and someone said, “hey! Let’s package Lifetime Movie Network with the Red Zone Football channel so guys can use that as a way to talk their wives into letting them order it!” ‘Cuz that would really work, cable company… (*eye roll*)

But anyway, Aa loves Red Zone. And I do not. Because there is never any downtime and it’s difficult to tear him away. But, although he may disagree, I tried not to complain about it toooo too much because he doesn’t get a lot of time off from work and he enjoys it. So anyway, he was struggling over giving up football coverage. But of course, he can still watch a lot of games on regular broadcast channels so when our last bill came and our introductory rate had been raised again, we called and cancelled! That’s it! We’re done!

We still have Netflix and we added Hulu Plus so I think we’ll still be able to watch most of what we could before. The downside is that we’re constantly switching between the tivo and broadcast and our apple tv (for netflix etc.) and we were overrun with remotes! I’m sure you know what I’m talking about. So anyway, when I spotted a cute little brown paper basket in the dollar spot at Target (my happy place!) I grabbed one and decided to pretty it up and use it to corral all those remote controls! 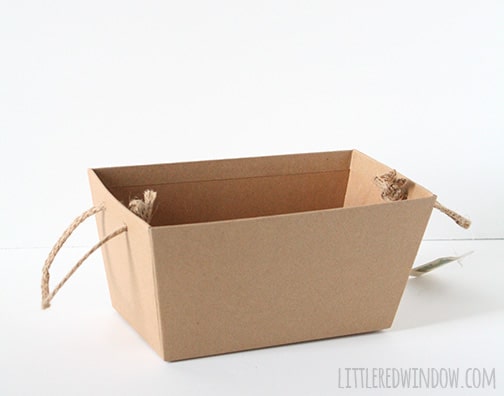 1.First I used some washi tape taped off about 1.5 inches of the bottom and painted that white. 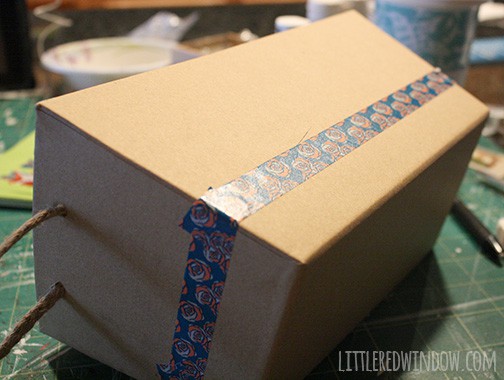 And I’ve got to tell you, I used washi tape instead of painters tape because I happened to have it right there and I didn’t want to get up and, wow, I got one of the best painted edges I have ever gotten. I might be using washi tape for this from now on!

2. After that I grabbed a white paint pen and drew a freehand herringbone pattern on the outside of the box.

3. I liked how it looked but I wanted to liven up the inside so I decided to add an easy no-sew fabric lining. First I untied the rope handles and set them aside. Then I set the basket on a piece of thin cardboard and traced the bottom. 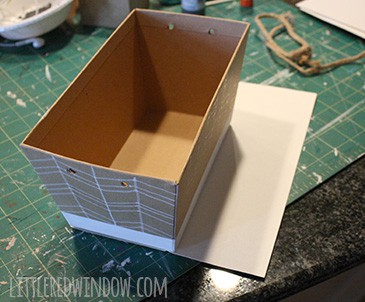 Then I cut that rectangle out, making sure to cut about 1/8 of an inch INSIDE the line I traced so it would fit inside the box.  Lay the piece inside the to make sure it fits with a little wiggle room so you can wrap the fabric around it. 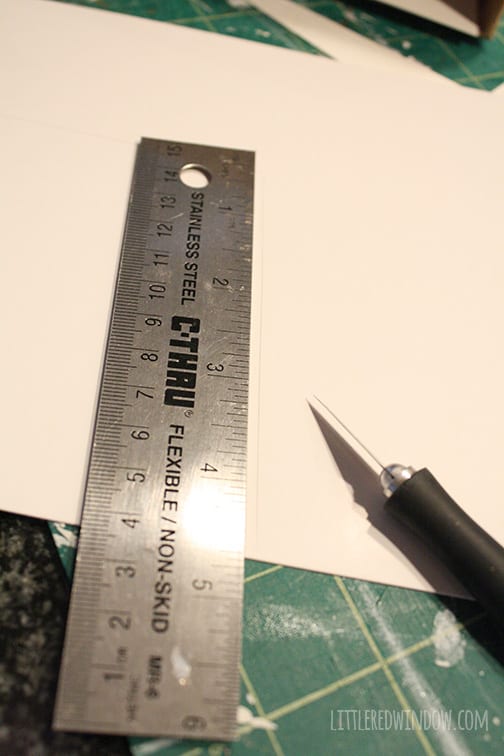 4. Then after choosing some fabric (hoarded Amy Butler Midwest Modern!) I cut a rectangle of fabric about a half inch bigger on all sides. 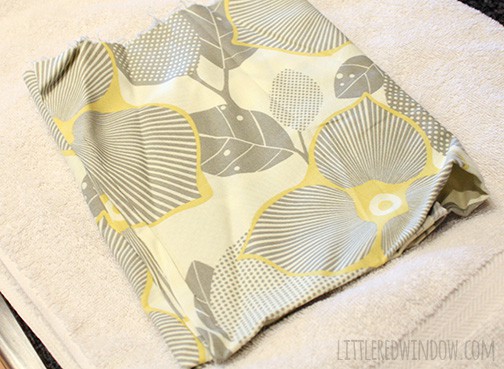 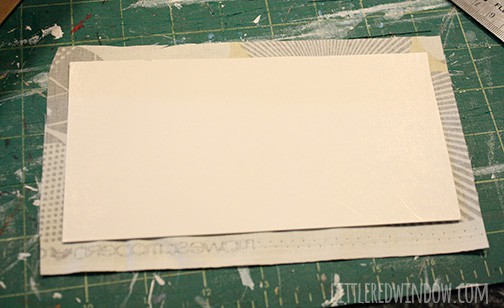 5. I used a hot glue gun to fold the fabric up and over the edges and secure it. 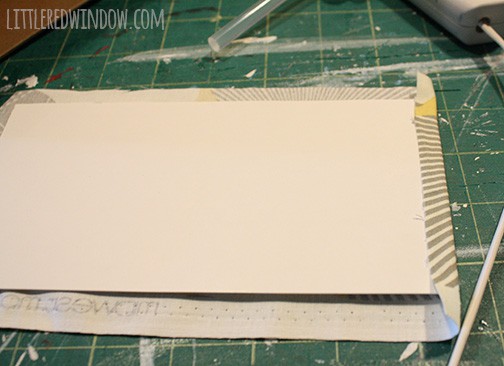 When all four sides were folded over, I fit the fabric covered rectangle into the bottom of the box. 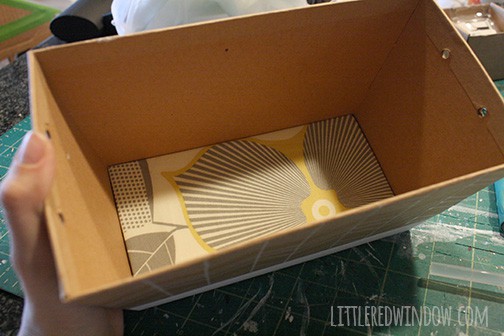 6. Then it was time to do the same thing for the vertical sides. I started with the short sides first. After tracing the short side onto cardboard, I again cut it out about 1/8 inch inside the traced line. 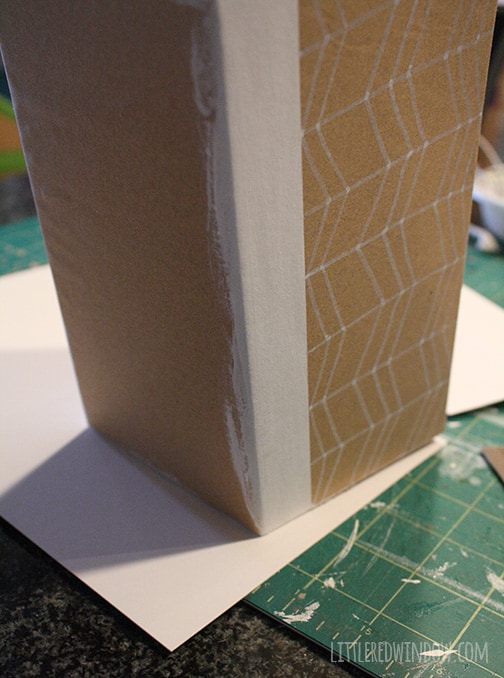 7. Then I put it inside to check if it fit and I marked where the holes for the handles were. Then I punched those with a regular hole punch. 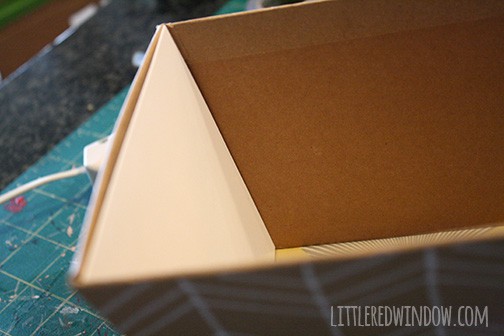 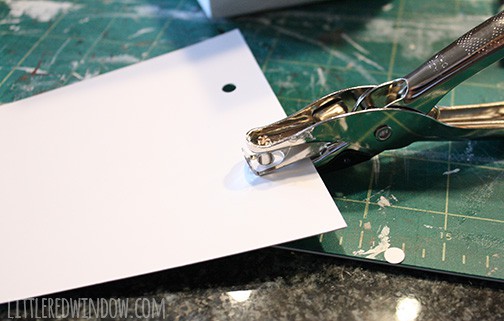 8. I cut a piece of fabric for this piece about 1/2 inch bigger on all sides. And this time I ironed a little piece of iron-on fusible interfacing on the back where the handle holes would go. I was hoping that would keep them from fraying or ripping. 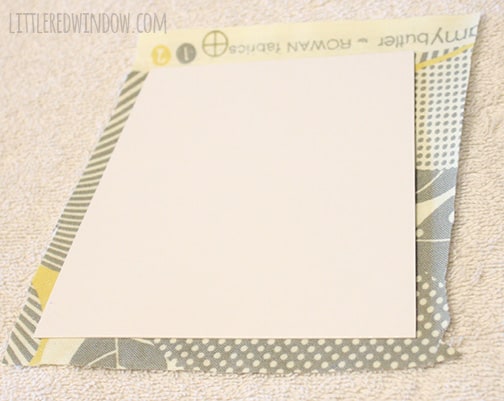 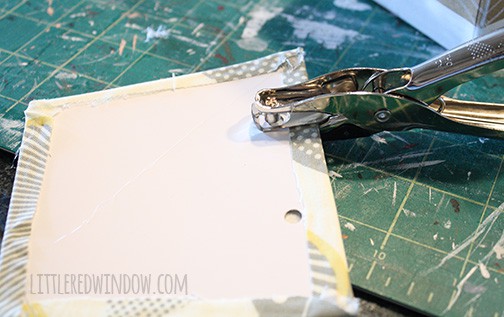 10. Then I put the end pieces back in the basket with the handle holes lined up and hot glued them.

I repeated the tracing, cutting, fabric wrapping steps for the long sides and then I was all done! A pretty Remote Control Basket with a no-sew fabric lining! I am already really enjoying not wandering around the living room looking for the exact remote I need! 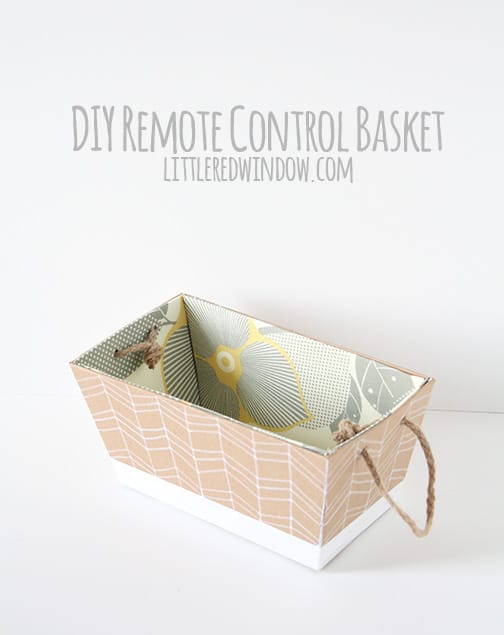 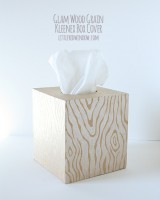 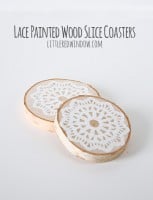