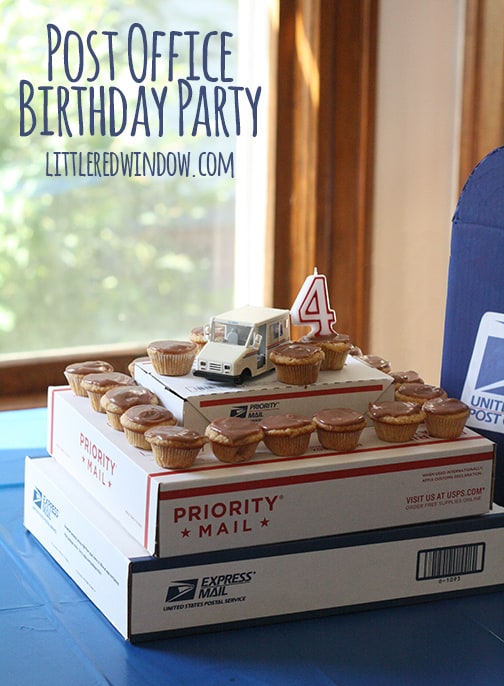 I totally love planning a party with a good theme. So when I asked O what kind of birthday party he wanted to have for his 4th birthday, I was bracing myself to hear Spider-Man or Toy Story, his current obsessions. Which would have been fine. But maybe a little too easy. And if you’ve visited Little Red Window before, you know I like a challenge. So I was surprised and delighted when he said, “I want a Mailman party!” Well, actually first I laughed and then I was surprised and delighted.

Lest you think O is crazy and this totally came out of left field, I will tell you, one of his favorite tv shows is a British claymation series called, “Postman Pat.”

We watch it on Hulu. Since I’ve never met anyone else who’s ever heard of it, let me introduce you. This is Postman Pat.

He’s a somewhat bumbling mail carrier in a small British country town. In each episode he gets a new (and generally sort of ridiculous) “special delivery” assignment (think giant magnet or huge block of ice) and highjinks ensue. But with the help of his sidekick Jess, the black and white cat, he always gets the package there on time and declares, with two thumbs up, “Mission Accomplished!” As far as kids shows goes, it’s actually pretty cute.

So that’s where the mailman party idea came from. And I was pretty excited because I knew it was going to force me to be creative. I had lots of ideas for decorations but the party didn’t really come together until O said to me one day, “Mom! At my mailman party, let’s deliver the mail!”  Which is pretty brilliant if you ask me. Because what’s better at a themed party than a themed activity?!

So I’m going to share what I came up with and I hope you’ll bear with me, I have a lot of pictures! I sent a quick digital invite (slightly modified for the internet): 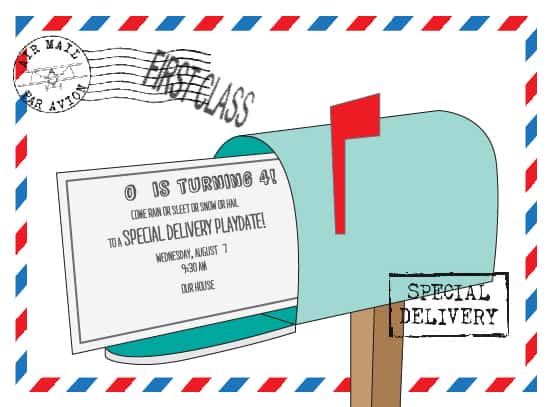 Then, for decorations, I went with navy and white with a little bit of red. And since I was planning this party in August after the 4th of July, it was easy to find a navy tablecloth,

etc. I used some (free) boxes from the post office to make a cupcake stand and O’s little toy mail truck as a topper: 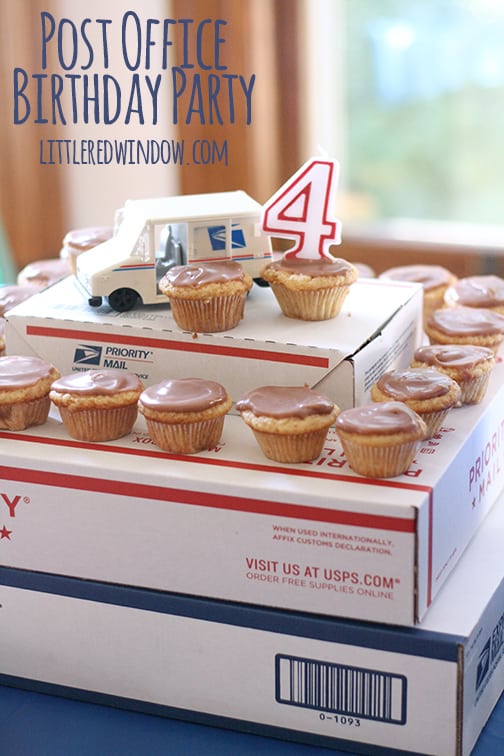 Around the room I hung streamers and (I totally did not get a good picture of this) I used Airmail Envelopes with a red and white stripe around the edge to create bunting.

For the activity, the first thing I decided was that, as a party favor, I wanted the kids to each have some sort of mail carrier outfit (there were only 5 other kids at the party, so it was a reasonable endeavor). I found cheap blank white hats and small messenger bags online: 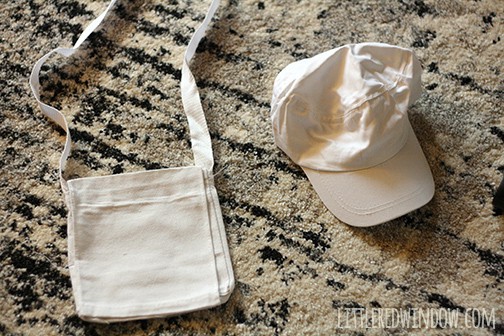 And then used iron-on printer paper to add post office logos to them. I just followed the directions on the brand of iron-on paper I used (which I would share with you except that I didn’t love it): 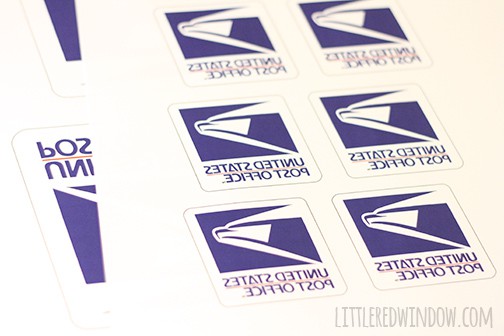 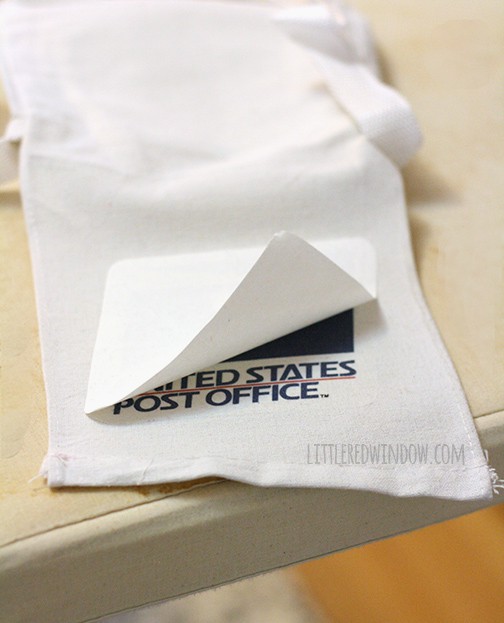 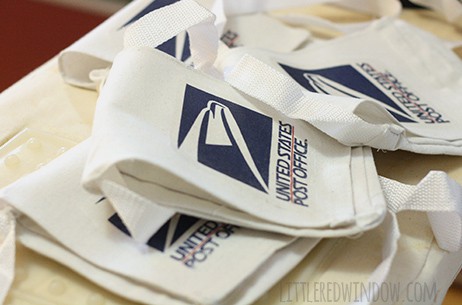 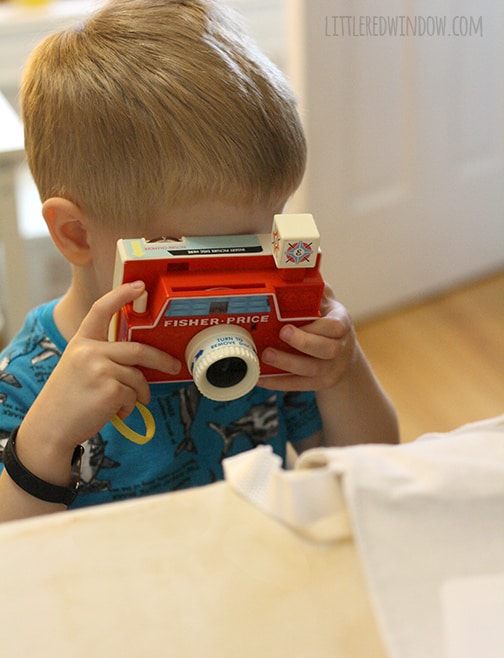 This project was way more fun since I had a “helper.” 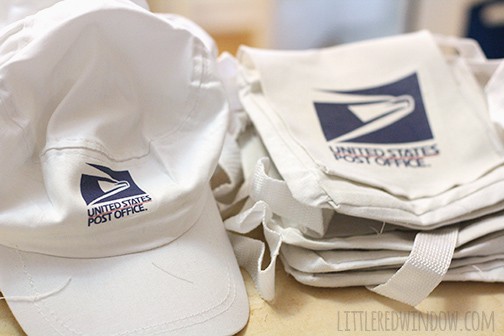 Here’s O, trying his out for the first time: 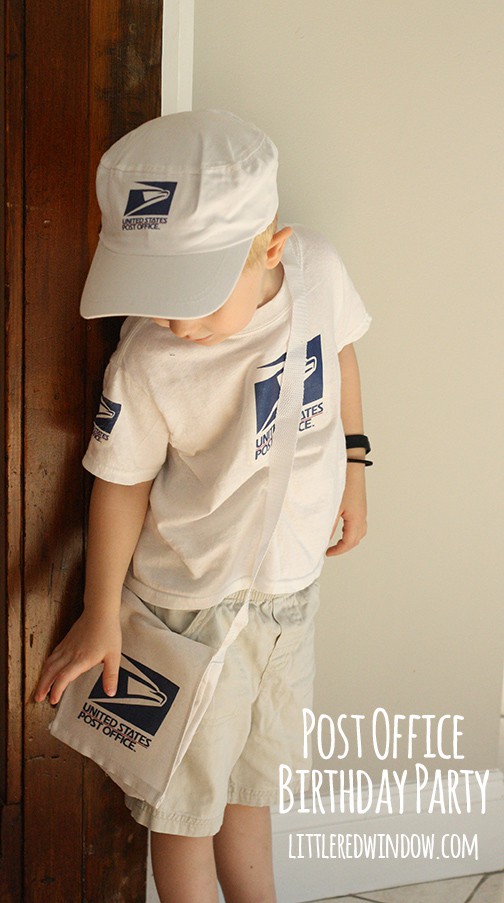 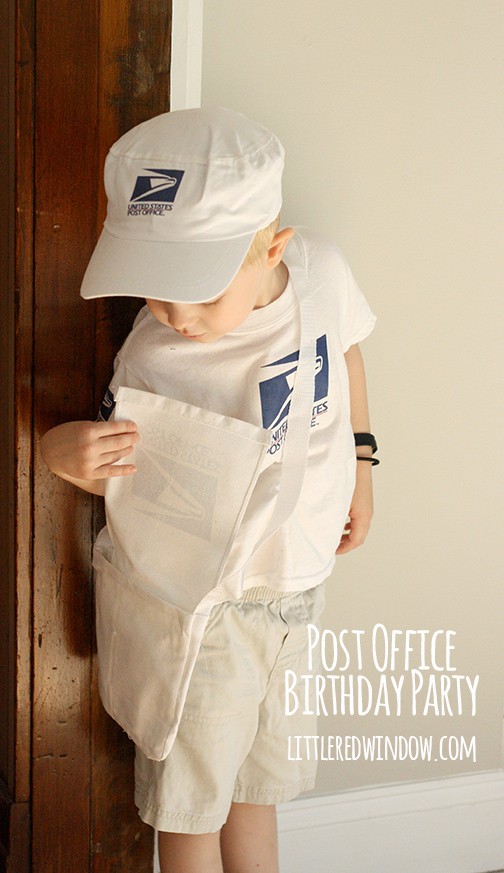 And then I made some small houses and small cardboard mailboxes so the kids could actually “deliver” the mail!

To make the houses, I found tiny mailboxes

at the party store (although look at the target dollar spot around Valentine’s day, I’ve seen them then!) and then simply cut a house shape out of foam board to stand up on top. The cutout around the mailbox was enough to keep it standing although I did add a little hot glue to the back as well: 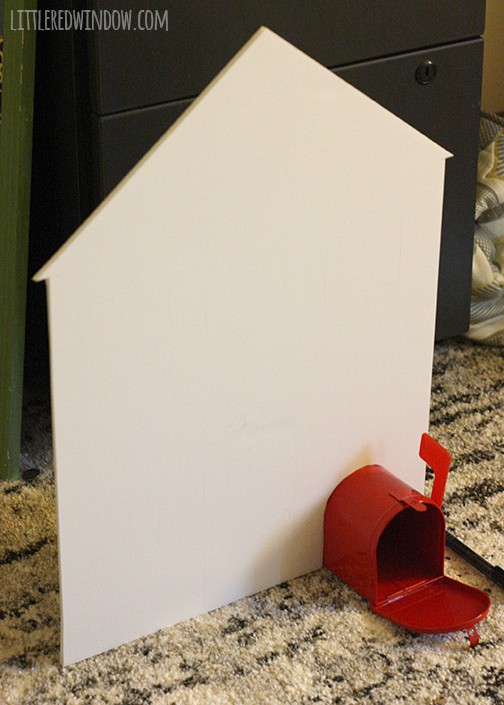 Then I drew the house details on with a sharpie. 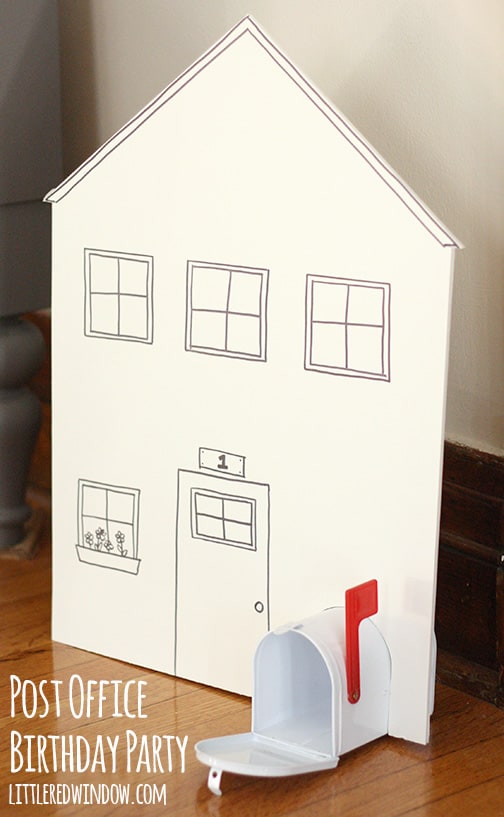 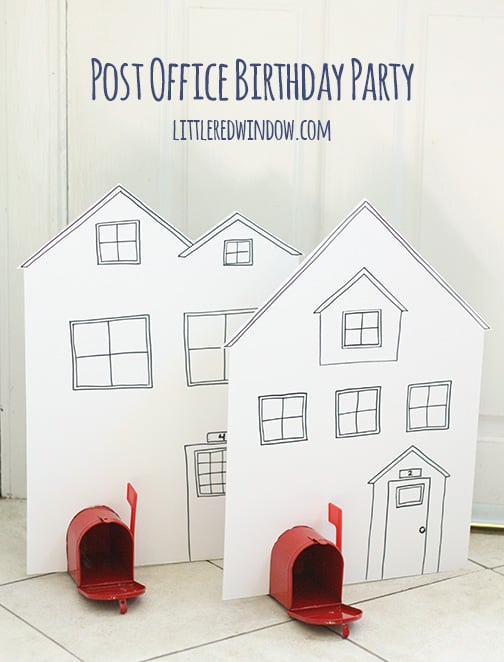 I also made two cardboard mailboxes (I will share a full tutorial for those later so stick around!): 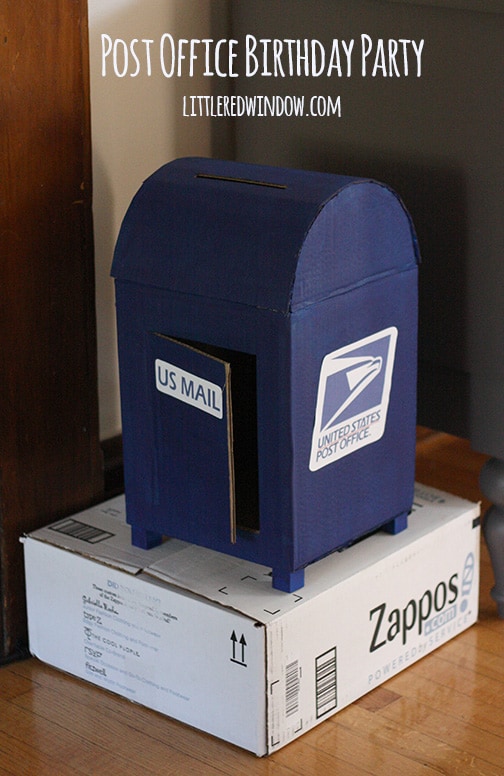 Did you notice that each little house has an address? They were No.1, 2, 3 or 4. So I got some Tiny Business card size envelopes, cute Mini Airmail Stamps

and some Stamp Stickers (affiliate links) and made little letters to be delivered to each house: 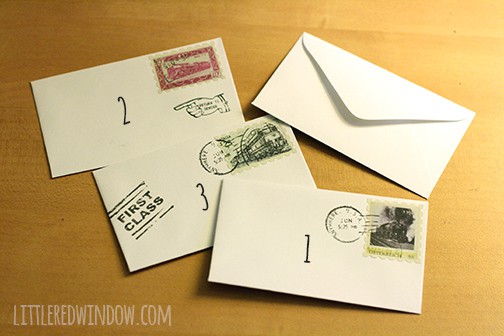 When they arrived, each of the kids got a mail hat and mail bag filled with letters to deliver. And to be completely honest with you, with kids this age (3 1/2 – 4 years old) you really never have ANY idea how planned directed activities are going to go or what they will find fun. But luckily they were totally into it and spent a good half hour delivering mail. (In my world I consider 30 minutes of any activity a complete success!) Also it was totally adorable: 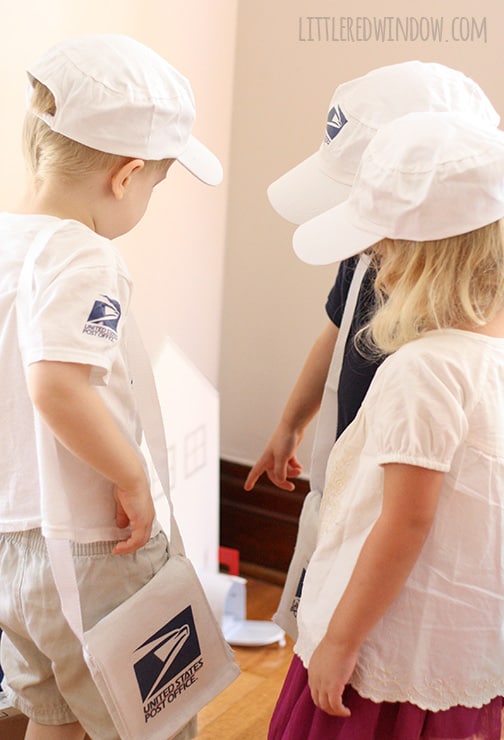 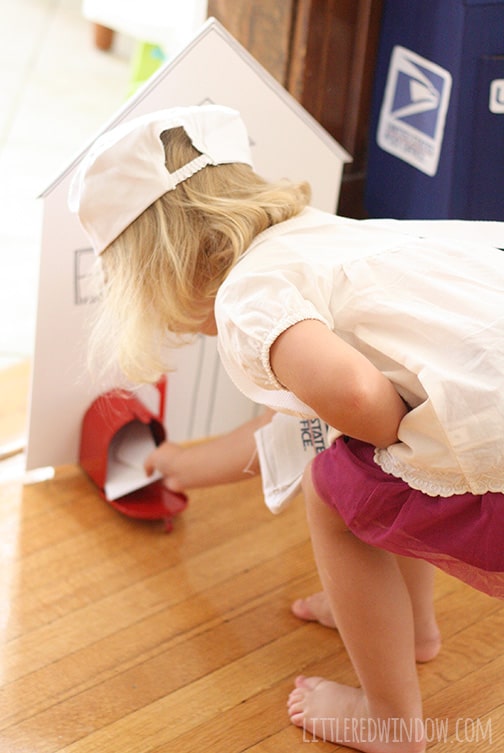 After that we played in the basement playroom, had lunch, and then played outside a little before everyone went home. I wanted to have small takeaway favors as well so I grabbed a few fun things from the dollar bin (stickers, a pencil, a punch balloon etc.) and just put them inside the smallest size post office box addressed to each friend. 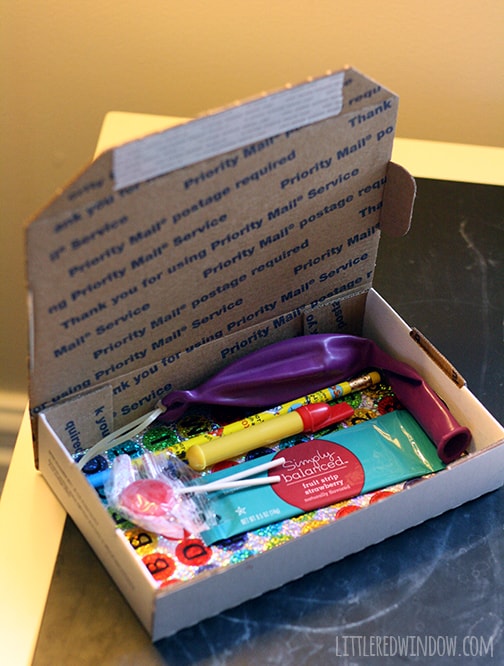 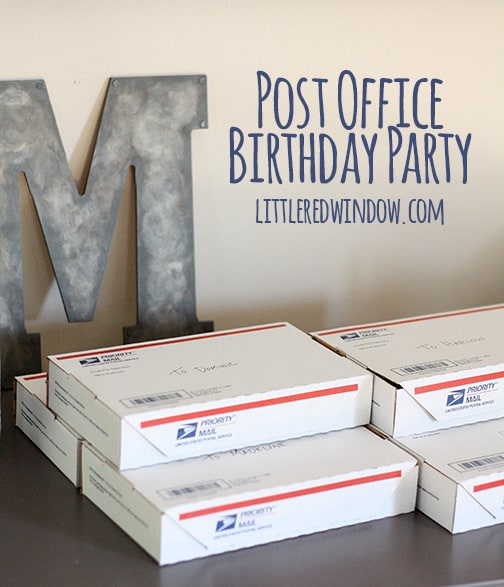 All in all it was a really fun party and I had a total blast planning it. (And, might I add, this is an awesome party to throw shortly after moving to a new house because, random boxes? They totally count as decorations!!)  Don’t forget to come back and visit, I’ll be back later this week with a full tutorial for DIY Cardboard Mailboxes!