Recently one of my aunts turned the big 6-0. She’s my mom’s youngest sister and for the last 20 years or so has lived in the Netherlands with her husband who is Dutch. So of course we miss her and don’t get to see her nearly as often as we would like! For the big event I wanted to send her a special present and my mom and dad, while cleaning the basement and trying to pawn things off on me, had come across what was left of my grandma’s wedding dress from when I made my DIY Vintage Wedding Dress Clutch. 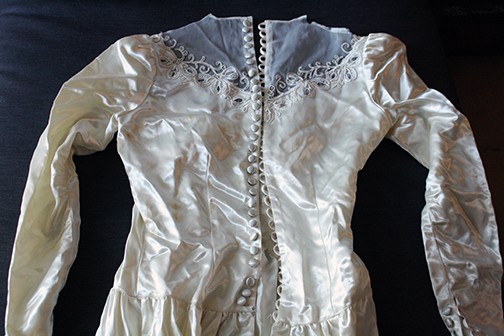 If you missed the previous post where I talked about this dress and what I made from it, it’s hard to see in the photo but it was actually fairly stained in many places, made of itchy polyester and so tiny that no one was going to wear it again. I was going to make something similar, maybe a bag or a little decorative pillow or something but one of my other aunts was going to take this over in her suitcase so I didn’t want to send anything too big. So, in the end, I decided I was going to make a pendant necklace that held a little piece of the lacey beading.

I was originally thinking I’d use a blank bezel setting

with some kind of resin on top but I went to Michael’s AND Joann Fabrics (really the only two craft options we have) and neither one had them! So that was frustrating.  Then on my second trip back to Michaels I happened to find a different kind of pendant that I had originally dismissed because it had a weird creepy photo of a Victorian woman in it. But upon further reflection, I realized that she was removable and so I got it. I should have left the creepy Victorian woman in so you could see… 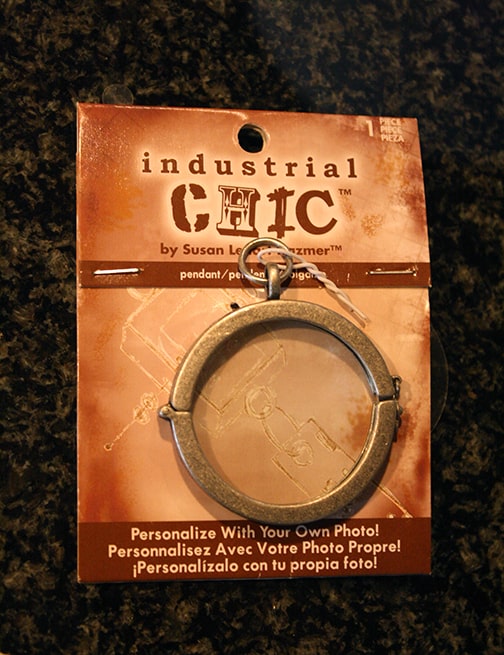 Anyway, even though it’s marketed it as Industrial, I actually think this particular one is pretty minimal so I thought it would work. The rest of the line leaned a lot more toward steampunk so I’m lucky I managed to find this one. 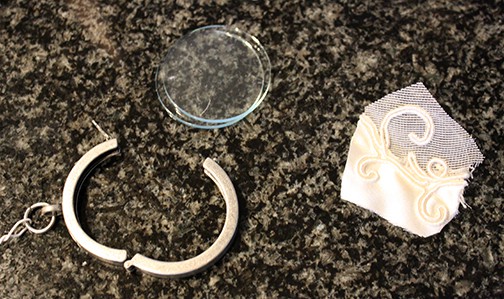 As you can see in the (terrible) picture above, it had a little latch on once side that opened up the circle on a hinge.  Then there were two rounded pieces of glass that fit inside. I just cut a little scrap of the dress, put it between the glass (with a few tiny spots of clear glue to keep it from sliding) and put it all back in. (This particular pendant is no longer available but here’s something similar I think would work if you took the charms out.) Then I added a little super glue to the latch so that it wouldn’t accidentally open and break. Here’s the finished product!

It was a big hit and I like how it turned out so much I’m thinking of making one for myself.  Have you ever made anything from a vintage wedding dress?  Was cutting into it as scary for you as it was for me? 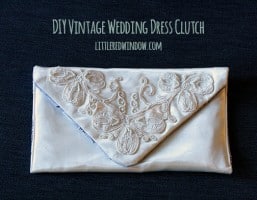