Happy Monday (or as we call it, the day after Breaking Bad is on)! If you’re a fan, you know the season premiere of the very last season was last night. And if it isn’t obvious, Aa and I are big fans. Yes, it’s pretty violent. But I still think the pilot episode of this show is one of the best things I’ve ever seen on tv.  But anyway, I digress. So last night we had a little season premiere party with a handful of good and similarly obsessed friends. In years past we’ve had blue rock candy to celebrate which is fun (if you haven’t seen the show, here’s a mini plot with no spoilers: High School science teacher gets cancer, starts cooking meth to make money for his family, makes super pure and desirable meth which happens to be distinctively blue. Crazy stuff happens.)  So blue rock candy looks just like the blue meth.  But this year when Aa went to the candy store in the loop where we’ve bought it before he was greeted with this:  It was closed!  Womp, womp!  So it was back to the drawing board. Which is when Aa came up with the idea for blue jello shots.  I don’t usually eat jello (gelatin is not vegetarian) but we figured it would be fun. (Ok, if I’m being honest, he had to talk me into it).  I did some googling and we read the basic recipe for Jello Jigglers and here’s what we came up with:

Spray your flat containers with Pam. We used Pyrex storage containers. Pour the Jello powder in a bowl, add the boiling water and whisk until it is all dissolved. Add the cold booze. Pour into flat containers.

Refrigerate for at least 3 hours. 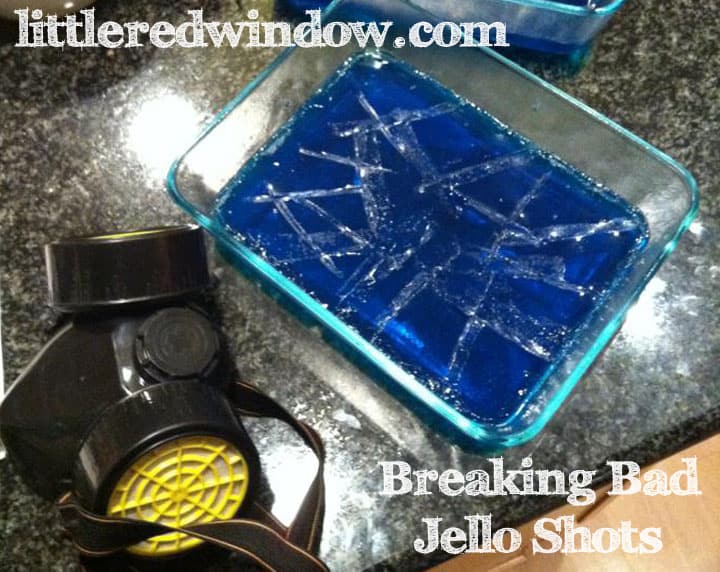